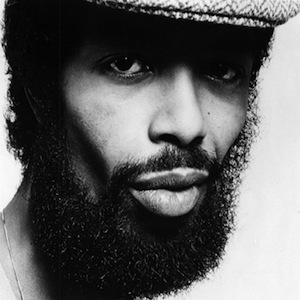 Gil Scott-Heron’s death was announced on Twitter. And that feels strange, this announcement. It happening in something that consolidates social construction into a linear sheet of micro-thoughts. Cleaning up the fringes, the frays and outliers. Funneling us into with herd, we stampeding beasts galloping with excitement only to corral ourselves into trending topics, redundant links and fleeting interest. Where fact can become fiction, and fiction can morph into reality. Where individual voices can get lost, and it’s difficult sometimes to decipher sincerity from pretense. It’s a hot mess with millions of voices that, together, somehow sound like only one. That seems like a sort of hypocrisy, or at least, a false existence that would’ve been subject to one of Gil Scott-Heron’s lyrics.

“Show that woman you’re a sincere black man,” he says in “Brother.” “All wee need to do is see you shut up and be black.” This closes a story where a man–every man–basically tries his best to be a non-white cultural revolutionary. He’s doing his soapbox thing, reading communist literature and frowning upon anything that subscribes to white culture. “And telling this woman to get an afro,” Scott-Heron says earlier, “But you won’t speak to her if she looks like hell, will you, brother?” Nearly any verse could be called out to magnify his point, which is colorless and biting: That sincerity is powerful, hypocrisy isn’t. But we are the latter so often.

That’s why Scott-Heron hasn’t simply been an icon of black culture, because speaks to the human experience, the hot mess with millions of voices but the same inhibitions, public perception chief among them. Sometimes, we need someone who isn’t full of shit to tell us how it’s going down. Because we’re full of shit a lot of the time, and we need reminders of that so we’re not full of shit all of the time. It’s a sort of masochism that draws us to communicators like Scott-Heron, who cut out our worst parts and show them to us. It made George Carlin what he was. It makes the film Network so eerily relevant, prescient and so oft alluded to today. Self-awareness facilitates progress.

When Scott-Heron released I’m New Here last year, an entirely new audience was introduced to his music, despite a recent deluge of compilation and live releases in prior years. Though his influence on music to that point was undeniably enormous, he’d almost never been a front-page-center kind of artist. Save one popular song, his enormity had been felt most in other people’s work, and almost anonymously for the casual listener. It’s not a matter of the quality of his own work. His catalogue is packed with spoken word, jazz and blues epics. Every song feels like it should be playing over a Super 8 montage, cut between him howling on a dark, smoky stage, and depictions of the life he’s singing about. This was the Scott-Heron that existed before and was discovered after that 2010 LP for a number of listener’s. For others, it inspired them to dust of his catalogue that maybe only showed up when they clicked “shuffle,” or for a rare week-long hankering here or there, but far between.

Whatever the case, Scott-Heron saw something of a rebirth toward the end of his life. Crumbling under the weight of a lifelong drug addiction, I’m New Here proved to be his swan song. It was a reminder that he was there. One that served to bring him, once again, to the fore. At a time when, no matter our color, we probably need to be told we’re full of shit. We’ll be the better for it. words/ j crosby