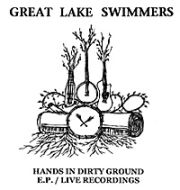 I did not have the pleasure of catching Tony Dekker’s Great Lake Swimmers live this past year, but a friend was kind enough to send me a copy of their tour-only Hands In Dirty Ground EP.I have posted on Great Lake Swimmers many times, but for those unfamiliar, imagine a hybrid of an early, pensive Neil Young crossed with My Morning Jacket at their most subdued. Also like My Morning Jacket, GLS use organic atmospherics to compliment their moody palette (The GLS debut LP was recorded in an abandoned grain silo, while the Bodies And Minds sessions took place in a lakeside church in rural southern Ontario).Great Lake Swimmers third LP, Ongiara, will be released March 27th via the Weewerk label on 12″ vinyl with Nettwerk releasing the CD version. Album details via Weewerk: “The title of the album was taken from the Toronto Harbour boat that carried the band to their initial recording sessions on Toronto Island with Dale Morningstar. Ongiara continues to explore the worlds of indie folk, roots music and alt-country pop, with a focus on lyrics and the craft of songwriting. The new record is permeated with a rich natural reverb, courtesy of London, Ontario’s Aeolian Hall, which creates the magical background on which the songs are painted.”
Below are two tracks of of the Hands In Dirty Ground EP which is now available via Weewerk.