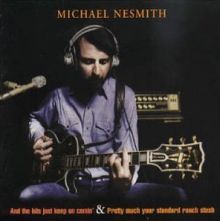 Oh yes, it’s that Mike Nesmith…the one from The Monkees…the one who always moved to the beat of a different drum. After the sixties television sensation ended, Nesmith went on to follow his muse which took him back, stylistically, to his Texas roots. The result were a number of under-the-radar country rock gems that come highly recommended to fans of the ’70s California country rock that permeated the canyons of that era.

Per the website: “Upon his departure from the Monkees in early 1970, Michael Nesmith’s solo career quickly blossomed. Three critically acclaimed albums with his First National Band (Magnetic South, Loose Salute and Nevada Fighter) and two hit singles (“Joanne” and “Silver Moon”) were released in little more than a year, but after that mainstream acceptance was hard to come by. Nesmith continued unfazed with a slew of quality releases, including an album ironically titled And The Hits Just Keep On Comin’.”

It was 1972s And The Hits Just Keep On Comin’ that first introduced me to Nesmiths post-Monkees ouput. Sample the two tracks below and let the sweet pedal steel (compliments of the legendary O.J. “Red” Rhodes) wash over you.

Elsewhere: Head over to Rising Storm and check out their feature on Newsmith’s classic LP Magnetic South.

3 thoughts on “Mike Nesmith :: And The Hits Just Keep On Comin’”