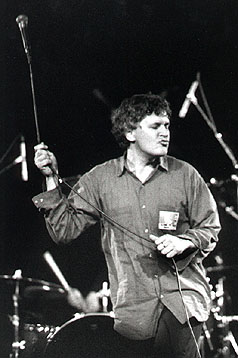 Released separately, alongside a companion DVD of the same name, this two disc set recorded in 2004, entitled Guided By Voices: Live From Austin, TX, finds Robert Pollard and company in the Lone Star state, visiting the set of Austin City Limits, doing what they do best: bringing the fucking rock show. The club is open.

Those familiar with the band, and their live recordings, will no doubt find the set to be on par with many a GBV show — both sloppy and inspired, and usually at the exact same time. That dualism is no doubt part of the charm that keeps us, the Guided By Voices faithful, glued to everything that Pollard & company release, solo or otherwise.

Recorded: 11/9/2004 “After twenty-plus years and an equal number of albums, EPs and singles, lo-fi indie-rock innovators Guided By Voices are calling it quits. Austin City Limits captures the band during their final tour performing songs from throughout their career.” Aired: 01/22/2005