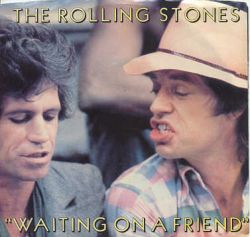 When it comes to classic and essential Rolling Stones albums, 1981’s Tattoo You (while not bad) doesn’t immediately spring to mind, but it was without a doubt the best Stones album of the ’80s.

Comprised of almost entirely ’70s sessions outtakes, the LP contains a few must-have tracks, including the Goats Head Soup outtake “Waiting On A Friend.” Recorded in Kingston, Jamaica at Dynamic Sound in 1972, “Waiting On A Friend” was scrapped (not having lyrics) in favor of other material only to be resurrected at the dawn of the eighties, which, fortuitously, just happened to correspond with the dawn of the music video and MTV.

This proved to be perfect timing, and the nimble Stones took full advantage of the new medium (therefore being one of the first groups of their generation to do so.) One of the initial fruits of the video age was the Stones urbanite “Waiting On A Friend” video, directed by Michael Lindsay-Hogg and filmed on location in Manhattan’s East Village. Savvy viewers will note the Stones (then) friend Peter Tosh makes a cameo in the video, sitting with Jagger and Richards on the stoop, before the two leave for the bar to meet up with Wyman, Wood, and Watts. Also of note: The building of said stoop is the same one featured on the cover of Led Zeppelin’s Physical Graffiti album (98 & 96 St. Mark’s Place). Oh, and by the way, that sax is compliments of Sonny Rollins.