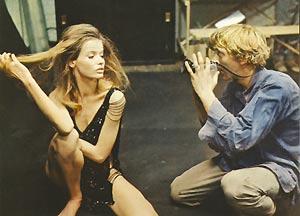 Italian director Michelangelo Antonioni’s film Blow Up, from 1966, left a lasting impression on me. Its depiction of mod-cool, sixties London, is aesthetically on point throughout its entirety — and that’s not even taking in consideration the actual (murder mystery) plot, which itself is both meandering (in the style of sixties art-house) and engrossing.

The Music: The majority of the film is scored by Herbie Hancock, which, while appropriate, pales in comparison to The Yardbirds segment in which a young Jimmy Page plays on while while watching bandmate, Jeff Beck, frustrated with amp feedback, destroy his guitar in the middle of a performance. This is the second time I have posted this video on the Drunkard. It is sixties London, blues based, garage at its best. It is also The Yardbirds finest incarnation.