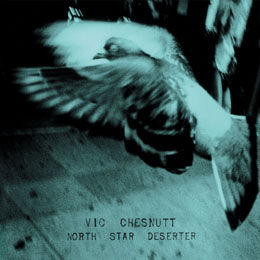 On a different level, Vic Chesnutt’s musical collaborators and co-conspirators, over the past 15 years, are almost as interesting and varied as the southern Gothic bard’s lyrical imagery itself. Always one for experimentation, the artist has collaborated with, among others: Van Dyke Parks, Lambchop, Michael Stipe, Will Johnson, Widespread Panic, and Bill Frisell. I could easily go on.

Peppered throughout the LP is Chesnutt’s trademark dark wit, which is now as innate to his songwriting as the Southern lore that inhabits his material. Because of this, North Star Deserter (while albeit stylistically different) feels very much like a continuation down the path first tread nearly twenty years ago via Chesnutt’s home recordings. I could not be more happy with this LP.