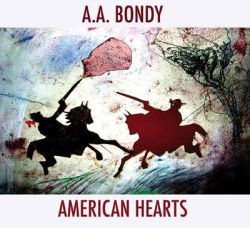 Production Notes: Recorded and mixed in a month at The Red Barn in Palenville, NY in January 2007, American Hearts is dark and sardonic but it’s not as claustrophobic, tortured nor troubled as you’d expect from the former Verbena frontman. The record is actually quite beautifully stark and stripped-down and well played, filled with great melodies and warm production. The songs are wonderfully influenced by an amalgam of folk and blues, filtered through the mind of someone who knows what makes a great rock song breathe.