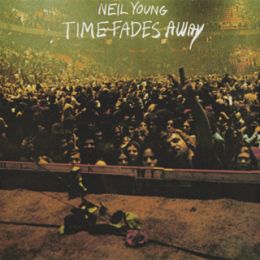 “Heart of Gold put me in the middle of the road. Traveling there soon became a bore so I headed for the ditch.” — Neil Young

The 1973 Live album, Time Fades Away, marks the first LP in Neil Young’s early 1970s Ditch Trilogy (see also: On The Beach, Tonight’s The Night). Somehow, 30+ years later, with the vinyl long out of print, it has yet to see the light of day in terms of a proper CD release. This is most definitely due to numerous accounts of Neil Young disparaging the album as his “worst,” which is unfortunate, because if you like your Shakey with a little dirt on ’em, Time Fades Away is as good as it gets.

Thankfully, this super-slick vinyl transfer of Time Fades Away has been widely traded in bootleg circles for years. If you’re a Neil Young fan and, somehow, have not gotten your hands on this album, then by Zod, man, stop what you’re doing and download the following eight tracks immediately. You’ll thank me later. These will be available for a limited time only.

Also: Stay tuned for Neil’s new, studio album Chrome Dreams II due out October 16th on Reprise Records. And via Billboard: “The first volume of “Archives,” expected Feb. 18, also will include the previously released concert sets “Live at the Fillmore East” and “Live at Massey Hall.” The remainder will feature material cut with Young’s early Canadian band, the Squires, and scores of previously unreleased studio tracks.” (via)

Not unlike Time Fades Away, Neil’s dabbling in filmmaking, what became the documentary Journey Through The Past (1973) is also not commercially available. But, like most everything in the 21st century, the film has found its way to the hallowed halls of YouTube.

Ostensibly a random collection of rehearsals, performances, general mayhem, and other bizarre “happenings,” the film is an interesting, if very uneven, look at Young and his bandmates during a highly creative point in time. The above is the first eight minutes of Journey Through The Past.