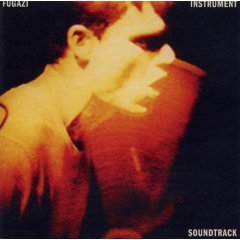 I recently re-watched (and re-listened to) the Fugazi documentary Instrument from 1999. Unlike the majority of Discord artists, Fugazi remain one band whose music, despite having been a fan for close to 17 years, never seems to lose its edge, nor my interest. I think this “staying power,” if you will, has to do primarily with the fact that no one else does what they do.

Sure, you can name a laundry list of artists who have purloined elements of the band’s style over the years — almost wholesale at times — but in no way can you charge Fugazi with creating anything outside of their own, distinct, style.

This point was again driven home watching/listening to the Instrument demos (see soundtrack), many of which would go on to surface fully formed on the next Fugazi release, End Hits. Even in their skeletal beginnings, the songs, whether laid out straight-forward, or experimental, have that sound that immediately signals a Fugazi jam — dub bass lines, spidery SG leads, syncopated, off-kilter, percussion — and, that’s without even hinting at the shared vocal duties between MacKaye and Picciotto.

Those of you who have kept up with MacKaye’s (excellent) side project, with Amy Farina, The Evens, will no doubt sense a connection between the rough Instrument demos and that of the pared down, (comparatively) hushed, vibe The Evens albums have been mining. Speaking of Fugazi related side-projects, anyone into that Joe Lally solo album, There To Here from late ’06?