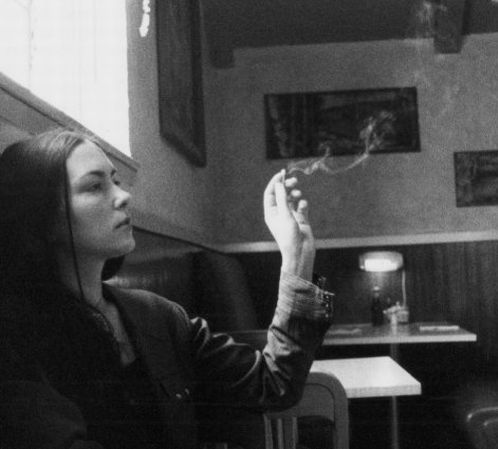 I recently caught up with Jesse Sykes, of The Sweet Hereafter, on assignment for the Arizona Republic. You can read an excerpt below and the full text, here.

Enveloping oneself in the music of Jesse Sykes, and her band the Sweet Hereafter, can be likened to the aural equivalent of stepping into a David Lynch project. Both inhabit an otherworldly cinematic sense of Gothic space and atmosphere.

We caught up with Sykes on tour to discuss her native Portland, Ore., the vibe of the Pacific Northwest, the transition to playing festivals and the genius of Townes Van Zandt.

* * * * * * * *
Question: The first time I heard your debut LP with the Sweet Hereafter, Reckless Burning, it felt like stepping into another world – all blue cigarette smoke, late nights and country Gothic. During the recording of the album, did you and guitarist Phil Wandscher have a particular aesthetic ideal going in?

Answer: With Reckless Burning it was really just a case of being completely engaged in the moment. That record really reflected exactly what was happening in our lives at the time, and because we were falling in love, there was a certain energy that was captured. We spent a lot of time together in the mountains and in the bars, so I suppose what you are visualizing makes sense! But, because it was our first recording together, I think we really had no expectations other than taking it day by day. It was too premature to have any notions of what we were trying to aim for on a sonic level or on a professional level – we just knew we felt strongly about the songs.

I do miss the innocence of that era, in that things were just not very complicated and there was no baggage at all. But that being said, I still go into the studio with out any real idea of what is going to happen, and maybe that record sort of taught us early on that you need to remain open and not limit yourself with any preconceived notions and that you need to take your life into the studio with you … the imprint of what is happening right then and there.

Q: Speaking of Wandscher, how did the two of you initially hook up? Did you two know one another back in his North Carolina Whiskeytown days?

A: We met in a bar shortly after Phil relocated to Seattle. It was in 1998 and he asked me if I wanted a drink … I said “no, thanks” and the rest is history!

Q: What influences your songwriting and vocal style? Do you have any particular cornerstones, stylistically, that come to mind?

A: It’s so vast and so hard to pinpoint. I know that I seemed to always be drawn to very distinctive singers whose voices were jam packed with emotion vs. technique. People who really embodied the song. As a kid I was obsessed with Mad Dogs and Englishmen which is a “live” record with Joe Cocker and Leon Russell (whom I love – and a bunch of other really cool ’70s notables). There is just something about that record – there is a real unleashed sort of gospel quality to it, and it just made me want to sing and to be part of something greater. It wasn’t until later in my 20s that I discovered Townes Van Zandt, who made me understand the importance of songwriting. At some point that became more important then being just a singer – I wanted to be a singer that at least attempted to write great songs. I think when you start writing, the music that comes out of you kind of dictates the way in which you are going to use your voice. But it’s the living of life that decides the way your voice will ultimately sound.

Q: Have you always lived in the Pacific Northwest? Does living there color your songwriting, say, compared to living in Arkansas or New York City? What role does geography play in your creative process?

A: It plays a huge role in that it’s such a beautiful place to be, and every day I thank God for it … I’m one of those freaks who talks to trees and goes on long walks looking for eagles and owls and slugs, that sort of thing. Being able to walk among the old growth trees every day keeps me centered and makes me want to keep creating. There are so many beautiful places in the world, but something about the deep resonate hum of the NW works for me the best right now. It’s hard to process all the changes happening in the world and on the environment, and it’s devastating to see how much we are screwing things up. Basically condos are being built everywhere in and around Seattle and the city is really changing in a bad way! It’s (expletive) up! So that sadness and frustration also gets swept into my creative process and is probably what keeps me trying to move forward in what so often seems like a really unfightable fight.