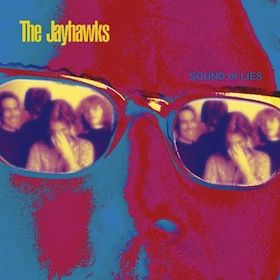 Not long ago I noticed The Jayhawks 1997, transitional, album, Sound of Lies, was out of print, which surprised the hell out of me.

Like many “transitional” albums, Sound of Lies is (literally) the sound of a band re-grouping and re-defining themselves after the exit of founding, and key, member Mark Olson. Below, Drunkard pal, and blogger, J. Neas re-visits the LP, and not surprisingly deems it an often overlooked neo-classic.

Partnerships in art are a fickle business. Creativity is often bolstered by the idea-editing of working with a sympathetic, but critical, similarly minded person. At the same time, the frustration can build as conflicts become inevitable. In indie-rock we’ve seen it happen a dozen times – Jay Farrar and Jeff Tweedy, J. Mascis and Lou Barlow, even recently with Jason Isbell’s departure from the Drive-by Truckers. Stuff happens. But how do bands that have built themselves so firmly around the dynamics of more-than-one deal with the aftermath? If you’re Gary Louris, you plow ahead and make one of the most challenging and forward thinking albums you’ll ever record.

Sound of Lies, I’m sure, had a lot of people nervous. Founding-member Mark Olson’s amicable departure following Tomorrow the Green Grass was, for understandable reasons, of some concern to fans of the Jayhawks. For those fans, their fears would be born out in Sound of Lies, but these are the same fans that may have felt that the holding-pattern of Tomorrow the Green Grass was an acceptable outcome for a band that had just come off of producing the sublimely perfect Hollywood Town Hall. As much as a good album by the Jayhawks is still a great record by almost any measure, it just wasn’t that exciting. And bear in mind that, while music is not a competition (enter snarky comment HERE), Wilco had seriously upped the ante the previous year with the double-disc Being There, a sprawling masterwork that took the all-encompassing alt-country genre as its base and then went off in some seriously wicked directions all its own. If anyone was going to care about the Jayhawks anymore, it was time for a change.

Sound of Lies opening three songs take a little over 15 minutes to go past and half of the album’s 12 songs either pass or come very close to five minutes in length. So what did they do with the extra space? This is dark, orchestrated, classicist pop. Opener “The Man Who Loved Life” builds to a soaring, troubling chorus that belies the lyrics within. Followed by the strangely heavy “Think About It” (what that song must have sounded like live, jeez) and the soft, sadly wistful “Trouble,” the songs are engaging, despite their length and melancholic tone.

The album continues along with songs that are dark pop (“It’s Up to You,” “Haywire”), rave-ups (“Big Star,” “Sixteen Down”) and the dramatic, minor-key seeming-centerpiece, buried late in the record, “Dying on the Vine.” It’s the album’s longest song (a few seconds short of six minutes) and the most simultaneously claustrophobic and manic song on the record. Its driving guitar line and drum beat gives the lyrics an unwieldy insistence to them: “I want to be the first to say / Black or white but never gray / I don’t feel like me today / I’m dying in the shadow.” Whether Louris intended to invoke T.S. Eliot’s vision of the morally ambivalent via “The Hollow Men” or not (Eliot: “Between the idea / and the reality / between the motion / and the act / falls the shadow”), it’s a stark description of a person lost in the dissolution of a relationship, unsure of what the meaning behind anything is, even themselves.

It’s followed by an odd choice – the Jayhawks-debut of drummer Tim O’Reagan as a songwriter/singer. O’Reagan cut his teeth as a songwriter in the Leatherwoods before he became the Jayhawks’ drummer and he has a knack for it. But despite being a good song, “Bottomless Cup” seems almost out of place amongst the desolate symbolism of the rest of the album. The closing title-track recoups what mood is lost with its spare piano and guitar scaffolding – Louris’ voice coming in quiet, high, nearly cracking and as close to tears as a voice can sound on record. It’s an immaculate closing number.

There really is no other album like Sound of Lies in the Jayhawks’ catalog. It’s unmistakably a Jayhawks record, but as far as being comparable to anything before or after, good luck. The band would retreat with the follow up, Smile, crafting a sound much more in-debt to the sunny pop that always lay just under the surface. And their swan-song, Rainy Day Music, would combine that with the more acoustic-driven folk-pop that Louris so easily crafts, probably in his sleep or while eating a meal. Think of the ‘difficult, dark’ album in any band’s history, maybe after some catastrophic happening or departure of one member or another and you’ve pretty much got Sound of Lies nailed down. It has an often-questioned place in the the Jayhawks’ body of work, but it is a record that well deserves a second look and has proven itself, to me at least, to be worthy of many repeated listens.