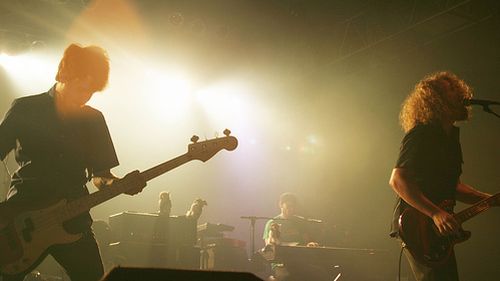 After a considerable silence, there has been a lot of My Morning Jacket news so far in 2008. First and foremost, details were revealed about the bands next album (it’s been awhile too, as Z came out in the Fall of 2005) that is presently being recorded and set for a June 10th release date. Immediately following, MMJ are scheduled to perform June 20th, in New York, at Radio City Music Hall. Pre-sales tickets are already being reserved, with public ticket sales beginning Friday, January 25th. Heads up.

Nearly a decade into their recording career the band remain one of our favorite outfits to have come into their own during the ’00s, and it’s still the earlier, spooky, grain silo, material we return to time and again. Just last week on the SIRIUS show, we played “Evelyn Is Not Real.” While not the loudest, it’s certainly the most affecting track off of MMJ’s 1999 Darla Records debut, The Tennessee Fire. Catch the band this March at SXSW.

4 thoughts on “Evelyn You Know My Heart’s With You…”