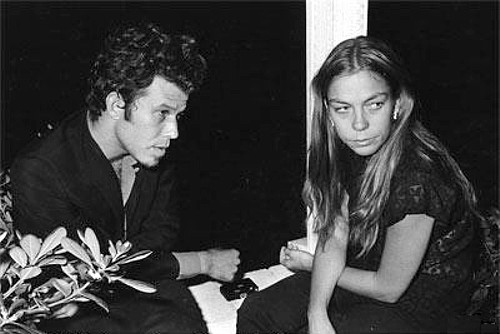 The exclusion of Rickie Lee Jones album, The Sermon On Exposition Boulevard, from my 2007 Year In Review was a complete oversight. Woops. Having both reviewed it as a freelance piece, and then blogged about it here, I inadvertently, 11 months later, forgot to include it. In fact, it was not until a few weeks ago, when I saw on the upcoming local calendar, that Jones would be doing a February residency here in Echo park, at the EchoPlex, that I remembered the album indeed came out last year. I have to wonder, what other albums/films/etc suffer from January release dates when it comes to list-makers annual tallies? Anyway, see you at the show.

Here’s an excerpt from what I wrote a year ago regarding The Sermon On Exposition Boulevard; sentiments I echo today:

“Exposition Boulevard further cements (Jones) reputation as an adventurous songwriter willing to follow her muse no matter where it may lead. In the case of Exposition Boulevard, that muse has led her into the often misguided territory of writing about Christianity and the Bible. Not surprisingly, Jones handles the material with both class and grace churning out as experimental and exciting an album as she has released in years; it is in a word, fascinating.”

Photo Note: I love the above black & white photo of Rickie Lee Jones, with Tom Waits, taken by Jenny lens in the late ’70s. At the tail end of the decade, prior to Jones’ own commercial success, she, along with a few others, was an integral part of Waits tight L.A. circle – haunting the city’s nightclubs, recording studios, diners and bars. If you’ve ever wondered who the blond featured on the back cover of Waits’ Blue Valentine LP , was, well, now you know…