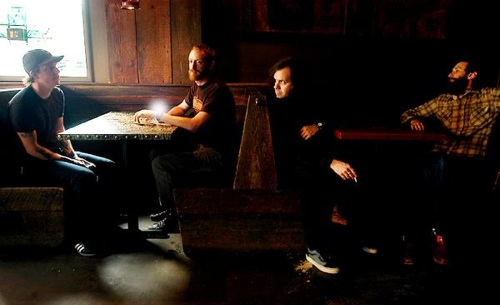 We’ve been keeping loose tabs on the progress of this album since the news broke that Band of Horses co-founder, Mat Brooke, was leaving the band in the hands of Ben Bridwell (following BOH’s 2006 debut Everything All The Time) to concentrate on his Grand Archives project. Now a year a half later, the LP is in the can, and like Band of Horses, it is being released by the Sub Pop label (tomorrow).

Whereas Brooke’s work with Band of Horses tended to wrap everything in a thick haze of reverb, Grand Archives eschews the echo. While the album draws upon a wide range of influences, it particularly showcases Brooke’s pop sensibilities, in sharp contrast to Band of Horses signature, emotive, guitar rock. A great 37 minutes of music from a band whose self-described ambitions are little more than “to tour the world, occasionally crash in a motel with soft towels, and, most importantly, find receptive listeners for their music.” With upcoming dates at both the Noise Pop and SXSW festivals, they are about half way there.

Elsewhere: Looking for more? Head over to IGIF for a batch of Grand Archives demos…