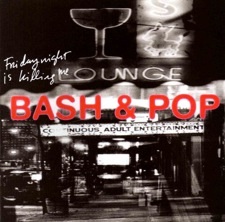 Tommy Stinson’s first post-Replacements project, Bash and Pop, also drafted Steve Foley, the man who had filled in on the kit following Chris Mars’ departure from the ‘Mats. Tommy is able to create some pretty amazing songs when need be, even if his first true solo album didn’t show it. If you’ve never heard “Satellite,” the one song he wrote (that I’m aware of) during his Replacements’ tenure, you need to get your ears on it. It’s a revelation on his talent.

But in the meantime, in honor of Friday night, and also because I’m jealous Satisfied ’75 is at SXSW and I’m not, here’s the title track from Bash and Pop’s one and only album. – j. neas