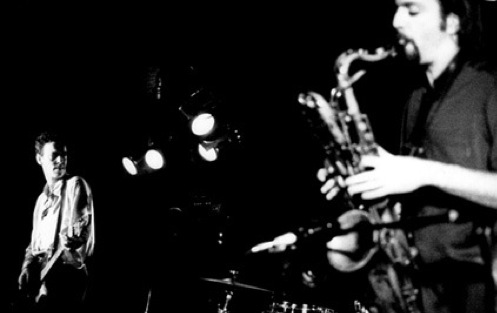 In 1995 and 1996 I was lucky enough to catch Morphine, live, three times during the Yes tour. Truly a club band if there ever was one, Morphine’s noir musical vision was all blue cigarette smoke, beat poetry and style. Below, J. Neas reflects on the last great Morphine album – the third in their canon – 1995’s Yes. – AD

The ’90s. Fabled land of mirth where all sorts of things went right for indie-rock. That may sound a bit odd to say, but there really hasn’t been a more commercially open time for music, before or since. (Feel free to argue with me about that in the comments.) The early ’90s paved the way for record labels to start grabbing all sorts of names out of the local scenes and granting them national contracts. Sometimes it paid off and sometimes it didn’t. But think about it – record stores actually had sections labeled ‘alternative,’ as if it were some sort of defined genre. You had all sorts of weird, random bands lumped together. It was everything music should be. For awhile.

In the midsts of this golden soup of bands was one in particular who repeatedly stood out in style and substance: Morphine. Armed with a two-string slide bass, a baritone sax, drums and the languid, cool vocals of Mark Sandman, Morphine was unique. By the time their third album, Yes, came about, they had built a sizable cult audience on the back of their previous album, Cure For Pain, selling more than 300,000 copies. Not bad at all for an indie release.

Continue Reading After The Jump…..

I remember first hearing Morphine (as is the case with a lot of bands from that era for me) on MTV’s 120 Minutes. Specifically it was the video for Yes’s lead track, “Honey White.” A driving, mildly frantic piece of rock, rooted in the rumbling horn-driven beats of early rock and roll, “Honey White” is an amazing opener. Sandman’s detached vocals come in with a wink and a sly smile, radiating cool out of every pore. Dana Colley’s baritone sax is the thing of legends. Given a larger stage to stand on thanks to the lack of guitars, the saxophone becomes, in addition to the bass, the driving force of the songs’ melodies. Sandman’s bass is as essential to the force of the songs as the sax. “Scratch,” the second song on the album, is primarily driven by the sliding bass lines, echoed in the chorus by the saxophone and paving a primal, post-blues that is fueled by the driving melancholy of the lyrics. “Testify,” you hear Sandman call out to Colley right before the sax solo.

Defining Morphine’s sound as a post-blues isn’t a bad starting point, but skipping, jazz rhythms are peppered throughout as well. “All Your Way” has the jazzier rhythms, as does the single, “Super Sex,” a song featuring almost free-association lyrics amidst the driving bass line. Here also are songs like “Sharks,” a stop-start song with skipping beats, wailing sax and one of Sandman’s most righteous and raucous bass lines, growling in distortion as it slides and rails beneath his warnings about the titular animals. “Free Love” comes on towards the end of the album, opening with an almost Melvins-esque crawl. Murkier than any of the other vocal tracks on the album, Sandman’s voice is nearly obscured beneath the sax and vocal reverb. When the song reaches full catharsis, it sounds almost like a no-wave song, recalling songs like the Stooges’ chaotic “L.A. Blues.”

Horns are often seen as a liability at best, a cheesy throw-back at worst, and when a band can distinctly and uniquely use them to their advantage, it’s a miracle of sorts. Morphine would only manage two more albums before the untimely death of Sandman in 1999, but their cult status carries on, bubbling right below the surface for music fans to discover and become enraptured with again and again. – j. neas