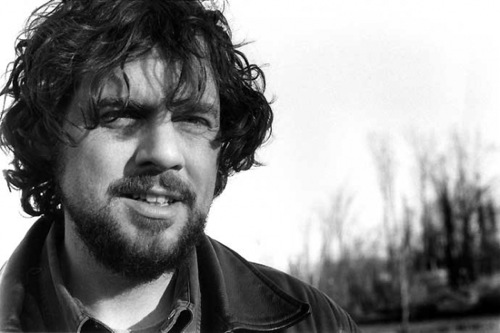 Currently on tour (note: Aquarium Drunkard will be presenting the West coast dates), AD caught up with Drive-By Trucker Patterson Hood earlier this week in NC to discuss, among other things, the Truckers latest LP Brighter Than Creation’s Dark, songwriting, revisiting a live album release, and the majesty of Spooner Oldham.

* * * * * * * * * * * *
Aquarium Drunkard: You guys have a new album out called Brighter Than Creation’s Dark. Can you tell me about the title – where did it come from and does it have any sort of significance to any theme for the album?

Patterson Hood: It came from a lyric in one of [Mike] Cooley’s songs. The song’s called “Checkout Time in Vegas” and we were trying to decide on a name for the record and having a hard time agreeing on anything. I got the idea of pulling that line out of the song and using it. It seemed to describe the mood of the record really well, so it ended up getting the most votes and that’s how it came to be.

AD: The new record sort of revisits the political-in-the-personal songs you’ve done in the past – I always think of “Putting People On the Moon” and other things that sort of have political statements coached within individual stories. What were some of the influences for some of the topical writing you did for this album?

PH: It all happened really natural. There was a family that kind of got in touch with us out of Wisconsin who had lost one of their brothers in Iraq and we ended up inviting them to a show, I think, in Milwaukee, and they came and kind of shared their story with us and that ended up inspiring the song “The Home Front,” although the song itself, the story it tells, isn’t literal, but it was definitely inspried by meeting them and some things they said and some of the things we talked about. Likewise, the song “That Man I Shot” was inspired by a couple of soldiers I’d met that had come home and it sort of assesses some of what they experienced upon being there and then coming back and some of what they brought back with them.

AD: One of the things about this record that a lot of people had been thinking about in the lead up was that this would be the first album in four without longtime member Jason Isbell. How does a band focus after you lose a prominent member? How do you re-focus yourself? What sort of process was it in gearing up to become whatever version of the Drive-by Truckers this was going to be for this record?

PH: it happened pretty naturally. We did this tour last year – we called it “The Dirt Underneath” – where we stripped everything down to the basics of song and melody and sort of rebuilt it from scratch. It was kind of an acoustic based tour. We brought our friend, Spooner Oldham, out to play with us on that tour. He played some keyboards. We had just written the majority of the songs that make up the majority of this record around that time, so over the course of the tour, we started working up songs every night at soundcheck and would try them out that night at the show and by the end of the tour, we were doing fourteen new songs. So that made up a big percentage of this record. It had already been kinda road tested before we went into the studio. Then, once we got in the studio, it was just a matter of plugging it in and turning it up a little bit which is actually a pretty easy thing to do. [laughs] So it happened really naturally and really easily. It was a good process. There’s a really good chemistry with the band right now and John Neff does an incredible job. He was an original member of the band and had been playing with us in addition to Jason for the last couple of years Jason was there, so it was a pretty easy, natural fit just having him take a little bigger role. We had Spooner for the recording of the record and that was really fun because we were wanting to move in some different directions and have a little more textures and little more of what a keyboard player could bring in. Of course, Spooner is not really just a keyboard player – he’s Spooner; he’s kind of his own thing. Nobody quite plays like him. That’s part of it too. We ended up dedicating the record to him because he was such a big part of it.

AD: It probably helps also that you have a songwriting partner, fellow band member, with Mike Cooley that you’ve been playing with for over 20 years at this point. How does the nature of that sort of relationship change? You play, you work with someone for over 20 years, it’s almost like a marriage in certain ways – how do you adapt and what things have to change over the years?

PH: It wouldn’t work if both of us weren’t able to change, fortunately, in ways that are compatible. It wouldn’t work otherwise, I think. It is, sometimes, like a marriage, but it’s been a long and a good one. It’s funny because we initially didn’t even get along. The first five years we played together, we were at each other’s throats constantly and the second five years we were only slightly less at each other’s throat, but the last 10 or so it’s really been pretty good. We get along really good now. We’ve both learned to accept those things about each other that are different that actually is what makes it such a good chemistry.

AD: Speaking of people who play prominent roles in the band, Shonna Tucker has been your bass player for a good bit of time. Was it a natural thing to have her step up and take, not only a more prominent role in the band, but a songwriting role?

PH: Yeah, you know, it only works because she’s a good writer as well as being such a gifted player. She’s been writing a long time, but hadn’t seen fit – she’d chosen herself not to take on that role in the band, but working on this record, she came into it with a new found state of mind and kinda ready to take on a new role. She walked in with two great songs that kind of knocked us out and then over the course of making the record, she wrote a third song, so it was really good having her step up because I really love her songwriting and love what she brings to the table. Not to mention I’m really proud of the harmonies she does on the record with me and Cooley – she does really great harmony singing.

AD: One of the things you have done is put out a vinyl edition of Brighter Than Creation’s Dark and, just to play devil’s advocate, why vinyl? At this point, why a vinyl version of a record. Does it create a profit for you guys to release that or is it more for the aesthetic? Why vinyl in this day and age?

PH: I don’t know how profitable it is at this point. I don’ t know. It’s definitely an aesthetic thing. It sounds better. This record in particular sounds really good in that format. Something about those warm mids that come with the frequency range of vinyl really suits this record well. On vinyl it’s on two records, divided into four sides, so the 19 songs are a little easier to digest, I think, than one CD with it going straight through. It kind of makes more sense, the sequencing of the record. It was actually sequenced for the vinyl. I think it makes more sense. It’s just a better experience. The artwork is bigger and better and that’s really cool. CDs are kind of a fleeting thing right now – no one’s quite sure what the future is on those. But if you get the vinyl and get a free download with it, it’s pretty cool. It’s kind of a best of both worlds.

AD: If you look at the track listing on the CD itself, it’s actually listed as four sides. That’s something that’s almost lost – the idea of sequencing a record for the idea of sides. Is that something you have tried to do with a lot of your records or is this something you were consciously doing with this one?

PH: We did it on our very first record which was almost more of a novelty thing at that time because this is before the resurgence of vinyl. It was really a frustration of ours – at that time we put out the record ourselves and we didn’t have the money to put it out on vinyl. There wasn’t really a market for that anyway much. But we went ahead and sequenced it that way, with the side one and side two, but we never really bothered to do it again after that. But this record, it just made sense. We knew it would be coming out on vinyl. More and more people are buying it, particularly people who are avid music fans and collectors and people who really – there’s definitely a growing movement of people who started recognizing the intrinsic value of the vinyl experience – a lot of those type people are people who tend to be a big core of our following that buy our band’s records. So it makes sense. Our vinyl releases have done pretty good so far. In fact, I think we’re already sold out of one of them – The Dirty South, I think. Hopefully they’ll press more.

AD: One record people may have had a hard time finding, especially recently, is the live album, Alabama Ass Whuppin because it’s now out of print. Have you considered putting out another live record at some point?

PH: I would really, really like to. Due to contractual problems with our former label [New West Records], I don’t know how long it’ll be before we’re really able to do what we want to do like that. But at some other point we’ll probably reissue that one too, because we do own the rights to that. I think it’s a good record. It’s a very different sounding record than what we sound like now, so I’ve been kinda hesitant to put it out without putting out something a little more current first, but I might get over that at some point and just put it out there anyway ’cause I would like it to be in print. I think it’s a valid period in our band’s history and our band’s been through a lot of changes, a lot of generations anyway. It’s almost like a missing chapter. It should come out at some point.

AD: So, as a summary, what’s in store for the rest of this year and what do we have to look forward to?

PH: Well, we’re going to tour a whole lot. We’ve been on the road, pretty much, since the end of January. We’ve got a good bit more touring to do, definitely for the rest of this year. I’d like to put out some singles. Record some brand new songs, just put out a couple, either on the Internet or press some 45s or maybe a combination of the two. Do something like that that’s kind of fun, a short term thing, nothing that’s the commitment of making another full record. This one’s a pretty full one as it is. We do have a few new songs that it’d be nice to have surface in the not-too-distant future and then take it from there. Probably start working on a more full-length record next year sometime. – j. neas