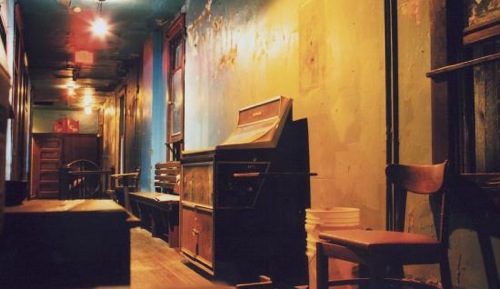 (note: i’m on the cross-country road trip for six weeks doing research on a book about memphis and the delta blues trail. car jamming is recurring feature that documents random curios along the way)

Welcome to the final (on-the-road) installment of Car Jamming. We’ve been staying in midtown Memphis the past nine days and – after six weeks on the road – we’ll finally be making the cross-country trek back to L.A. tomorrow morning. While I’ve been coming to Memphis off and on over the past ten years, the past 9 months doing research for the book have definitely been the most concentrated. Along with many a new find (cheers to our new friends at Shangri La Records, and The Buccaneer), I’ve also made a point to re-visit old favorites. Case in point, no trip to Memphis would be complete without a Soul Burger, and ice cold beer, and a few spins on the Soul-heavy jukebox at Earnestine & Hazels. A living, breathing piece of history, the former brothel (said to be haunted) has played host to all manner of folks over the years (the STAX crew, Ray Charles, James Brown, Otis Redding, etc), and in recent years has gained notoriety as the go-to filming locale for Hollywood location scouts (recently featured in both Elizabethtown and Black Snake Moan). Despite this new found fame, I’m happy to report that the joint has remained as dank and funky as ever.

Four years ago Loretta Lynn released, the Jack White produced LP, Van Lear Rose. If you happened to miss it, I highly recommend picking it up. The pair (backed by The Greenhornes rhythm section) filmed the video for the single “Portland, Oregon” inside Earnestine & Hazel’s. Video below. Above photo, credit: here