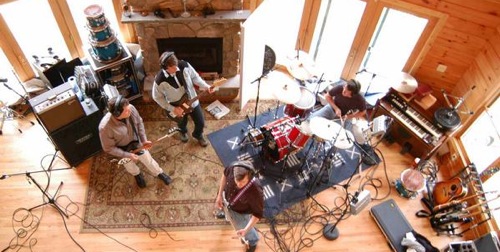 I seem to go out of my way annually to crown a power-pop champion for the year. Someone whose subversion or reverential recreation of the genre is so willfully brilliant and fun that I have to listen to the record over and over. In 2006 it was Devin Davis, last year it was Georgie James, in 2008 it’s Julie Ocean.

But despite this being a debut album, the people involved aren’t surprising. With a pedigree that includes members of Velocity Girl, the High-Back Chairs and the Saturday People, Julie Ocean is one more cog in an incestuous indie-rock machination of bands that have made a living out of co-opting and vividly and uniquely recreating some seriously classic rock and roll tropes: surf music, harmonies, three-minutes and less running time, jangly and crisp guitars. Long Gone and Nearly There follows in the best tradition of albums like The Ramones and, in more recent times, Is This It, hitting with force, quickly and succinctly, leaving the listener ready to hit play again at the end. The album blitzes by – 10 songs in 25 minutes – without a wasted note.

The first four songs roll by at an amazing clip – “#1 Song” and “My Revenge” being the two standouts. The former even contains a lick of guitar that immediately recalls a faster version of Matthew Sweet’s “I’ve Been Waiting.” The latter is possibly the record’s most perfectly condensed moment: background harmonies, shimmering guitars, a glorious chorus, a pace that never slackens from note one. It even follows that grand tradition of juxtaposing ridiculously up-tempo music with somewhat bitter lyrics. “Just a little bit of sugar,” as Julie Andrews sang.

The proof of Long Gone‘s brilliance lays in track five – the one song on the album that really stretches out. A little over five minutes long, it’s the type of song that normally drags a record like this down. In the midsts of brilliant, short, punchy gems comes the long form song. But “Here Comes Danny” defies expectations – it’s the epitome of the other tracks’ perfection extended out to five minutes. I had to double check the time when I began writing this. “Here Comes Danny” has been one of my favorite tracks on this album since I first listened to it, but I was honestly shocked to find out how long it is. It doesn’t feel anywhere close to that – with its guitar solo and megaphone-shouted background chorus, it’s completely engaging. A record full of songs like this would begin to wear on listeners, but placed within the shorter pieces, it only reinforces just how sharp Julie Ocean is.

The back half of the album soars as well. “Bright Idea” hums along at punk speed with its “ahhhh” undergirding. The other true standout, “There’s a Place (In the Back of My Mind),” sounds like a lost Buddy Holly track, and this is the one misstep in the album. This song should have been the final song on the record. Instead, the album ends on the breakneck “Looking at Me/Looking at You,” a fine song in its own right, but it leaves the album more open ended. This is a quibble over sequencing, which isn’t a major complaint at all, but I feel like ending the album on the former track would’ve even further pushed listeners to want to hit the play button again immediately upon its finish.

Long Gone and Nearly There arrives just in time for summer and to truly throw down the gauntlet for power-pop in 2008. If you’re going to step to this album, you’ve got some mighty large and catchy shoes to fill. – j. neas

5 thoughts on “Julie Ocean :: Long Gone And Nearly There”