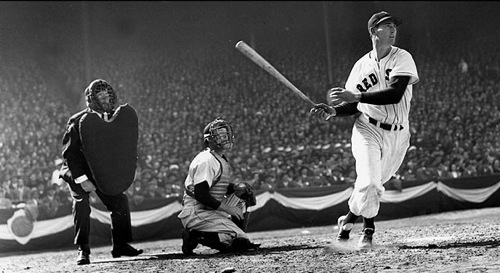 It’s a well-known fact that there has never been a bad song recorded about baseball. Not one. I’m even willing to include John Fogerty’s synth-clapping “Centerfield” (ed. brave) and every last one of those jazz songs about Willie Mays and Mickey Mantle that came out when my dad was a kid. Whatever the case, something about baseball has historically lent the sport the uncanny ability to wink at itself. Go back and listen to those old songs, if you can find them; you can practically hear the grin on the Mantle’s face when Teresa Brewer coos on about how much she loves him (“Not Yogi Berra?” quoth the Mick).

The Baseball Project — Steve Wynn, the Minus 5’s Scott McCaughey, REM’s Peter Buck, and Miracle 3’s Linda Pitmon — draw deeply from the dual traditions of baseball and rock ‘n’ roll to create a sort of baseball breviary that has enough sparkle and bite to keep even non-fans on deck. The guitars crack like bats and Wynn’s organ ushers in outfields in the late summer with relaxed anticipation, while he and McCaughey belt out in anthemic harmony. Imagine the Traveling Wilburys over the stadium P.A.

Like the game itself, Frozen Ropes and Dying Quails rewards close attention. “Ted Fucking Williams” portrays the legendary slugger as a man whose ego overlapped his humility, and finds him admitting that, while Mantle was certainly a hell of a player, “there’s nothing that he can do better than I can” (the song’s title refers to a statement Williams was apparently fond of yelling during batting practice). “Jackie’s Lament” imagines the internal tug towards retaliation that Jackie Robinson felt when he was made the victim of racial hatred as the first African-American baseball player; McCaughey chants “I only wanted to play the game” over a dark, banging piano line. We tend to think of baseball players, particularly Jackie Robinson, as superheroes who are able to overcome any obstacle; here the players are taken off of their pedestals and observed as human beings. In turn, we gain a more robust appreciation of Robinson’s sacrifices and struggles and, ultimately, grant him even more reverence as true flesh-and-blood as opposed to mere bronzey bust.

But it’s not all dense character studies. Baseball is, after all, a game, and Wynn settles into a playful groove on “Harvey Haddix,” which tells the story of the beleaguered Pittsburgh pitcher who threw twelve perfect innings only to give up a hit and eventually the win back in 1959. The song is thrilling, if for no other reason than to hear the duo fit the names of all seventeen perfect-gamers into rhyming refrain. Elsewhere, McCaughey’s “Sometimes I Dream of Willie Mays” sets the singer’s memories of driving north with his father to watch the Giants’ Hall of Fame centerfielder in 1965 over a sweeping guitar as foggy as San Francisco. It is these songs that register the deepest. Baseball, like all spectator sports, isn’t really about the actual game so much as the memories we create together as we cheer for our favorite teams; as Wolf and McCaughey sing out in harmony over summer guitars, they echo this sentiment back, from the grandstand to the cheap seats. – words/marty garner