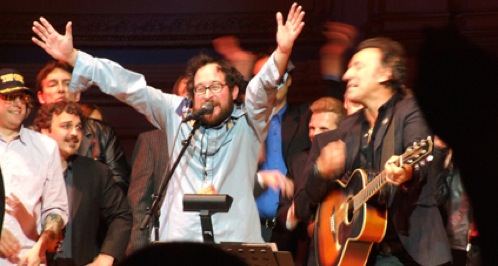 This is part II of II of Marty Garner’s AD Interview with The Hold Steady’s Craig Finn. You can find part I HERE….

Craig Finn is a normal dude. He may be “gettin’ a lot of double takes when he’s comin’ around the corners,” (as he sings on the title track of the Hold Steady’s excellent new record, Stay Positive) but at his core, Craig Finn is a genuinely, refreshingly normal dude. That may explain the enduring and escalating popularity of his band. Unlike the untouchable, self-styled indie rockers that are ten years his junior, Finn and his crew all look like a bunch of guys bangin’ out a few songs after a long day in the cubicle. Indeed, if Finn weren’t so damned literate, you’d wonder if he even knew the meaning of the word “pretension.”

The group’s refreshing and honest attitude, along with the love and passion that shines through all of their work, has won them what can only be described as a legion of fans (who call themselves the Unified Scene) and a critical lauding that most bands would kill for. Their big, classic rock ‘n’ roll (“bar rock,” most people label it), is girded by Finn’s storytelling, which finds its most comfortable soulmates in the Catholic sojourning of Jack Kerouac, and the weary hope of poet John Berryman. It’s a lush sound, one that practically gurgles with power and positivity, as hard as the streets that Finn’s characters find themselves unable to escape and as comforting as the faith that typically saves them. – marty garner

AD: Stay Positive seems like a very autobiographical song, a sort-of “This is what it looks like to be Craig Finn,” if you will, and it’s very much about the fans, about the “Unified Scene.” I know that the reaction on message boards has been very overwhelming, but what has it been like when you play that song and people react to it?

CF: “Stay positive” is how I’ve been signing my autographs for the past two years, and it felt like a line from a hardcore song or something. You know, the [phrase] “unified scene” came out for the first time on Almost Killed Me in the song “Sweet Pain.” When I wrote [“Stay Positive”], obviously, it’s a nod to the people and to the shirts, but also to the concept of a “scene utopia” where everyone gets along. And that reminds me of those late 80s hardcore shows, too. I can remember when I was growing up, what music meant to me as a fan. I grew up in Minneapolis, which had a great all-ages scene. There were shows and the same kids would be there, and we all bought the records, and we’d see each other all the time. All your friends would be there. It is something that excites me, this community that’s sprung up around our band.

AD: It’s interesting, too, as someone on whom rock ‘n’ roll has had such an effect, that you’ve had such a profound impact on people. One of my good friends got through a rough breakup by listening to [Boys and Girls in America’s] “Stuck Between Stations.” He realized that if something as good as that song exists in the world, then everything’s going to be alright.

CF: That’s wonderful. I think that everyone in our band and probably everyone I know has had a moment where music made them feel that way. I know I have. Being a part of a music scene as a kid gave me a lot of confidence. It made me realize that there are all of these people out there who liked the same things I did, and they weren’t weird, and they weren’t freaks.

AD: I live in Los Angeles, and out here we have the Smell, where that sort of thing is happening.

CF: The Smell’s a great example. I see photos from there and it really looks like something exciting is happening there. Of course, there are always people that are more-or-less involved, but I think there’s really something interesting going on out there.

AD: Yeah, I just moved out here, so I’m not really used to that sort of thing yet, but it’s been cool to go out and not feel judged or rated. It’s this weird thing where you can just watch the band and have a good time.

CF: That’s how I felt when I discovered punk rock. It was really exciting. When I was in Lifter Puller, coming out of Minneapolis in the late 90s with Atmosphere and a bunch of bands, it really felt like a scene there. Obviously, living in New York, it’s so big that we aren’t really a part of anything like that, but we tour so much now that our own scene is the bands that we see all the time on tour. At every festival there are a couple of bands that we know.

AD: You’ve mentioned The Clash, 7 Seconds, the Replacements, Springsteen, and all those other bands playing an important part in the forming of your identity. What was it about them that spoke to you?

CF: I think that there was just something different, something more honest and more straight and more applicable to my own life than [what was going on on] the other records I was hearing at the time, like Van Halen, Iron Maiden, and Judas Priest with their wizardry. And Van Halen was just partying and chicks, and I certainly wasn’t getting any chicks. But the Descendents, when I heard them, that made a lot of sense. They were alienated a little bit, but smart, and a little angry. Them and the Replacements. Well, the Replacements were maybe a little more romantic than the Descendents, but I think that that was really what spoke to me: that honesty. The music did a lot, too, and I certainly do like Van Halen, but those bands spoke to me directly at a younger age.

AD: I feel like that’s why so many people identify with you. The five of you seem so normal, like you were like us when you were our age. Well, except maybe for Franz.

CF: (laughs) Maybe, I don’t know. Maybe he developed that way when he got to New York. You never know.

AD: (laughs) But you don’t see that very much. I mean, how many indie rockers are really into baseball?

CF: Everyone likes baseball in indie rock now! When I was growing up, no one would ever admit that they liked sports if they were in a band. But now, pretty much all the bands we meet like at least one sport. There’s a pretty big baseball thing with indie rock. Most of the bands we’ve toured with have been fans; not all of them, but a lot. I’m pretty into it. In fact, I just went home and went to a Twins game. They gave me a tour and I got to go on the field and into the dugout and I got to meet some of the players. It was super-cool. And since then they’re 7-0.

AD: Probably because of you, right?
CF: Yeah, I’d like to take credit.

AD: Are they still playing the version of “Take Me Out to the Ball Game” that you guys recorded?

CF: I don’t think that they’ve played it as much this year — it was kind of a last year thing — but the night I was there, they knew I was there, so they played like seven Hold Steady songs during the game.

AD: Wow, that must have been pretty incredible.
CF: Yeah, it was amazing.

AD: Being baseball guys, it must have been pretty cool having a song on MLB 2K8.
CF: That was pretty cool, though I’m not a video game guy, so I only heard about it.

AD: So, as a huge fan, what was it like singing “Rosalita” on stage with Springsteen?

CF: We did this benefit at Carnegie Hall where we all played Springsteen songs. We weren’t sure if he was gonna be there, but he ended up coming. He pulled everyone up on stage and asked if anyone knew the words to “Rosalita.” I’d learned the words because I thought that the Hold Steady were going to do it, so I got to sing the first verse. Then Damon from Badly Drawn Boy did the second verse and Jesse Malin did the third. Then he called me up to finish the song. It was an incredible night. I felt like I was gonna burst. There was one second where I realized what was happening and I thought to myself, “I can’t believe I’m singing with Bruce Springsteen at Carnegie Hall,” and then I decided that I probably shouldn’t think about it because I’d be likely to screw up. It was a real rush. When we came off the stage, he said, “Thanks for holdin’ it down out there, brother.” It was so fun. I didn’t know three seconds before that that was gonna happen. But the next morning, I’m checking my email and people are sending me photos of it. It was already on Reuters.

AD: I’m a huge Springsteen fan, so I can only imagine what that must have been like.

CF: Have you seen him live before?

AD: Yeah, my Dad and I saw him in Cleveland last fall.

AD: It was amazing. He played “Saint in the City.”

Previously: Franz Nicolay of The Hold Steady :: The AD Interview (2006)