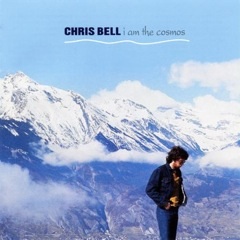 This post actually began as a Sevens piece reflecting on Chris Bell’s single “I Am The Cosmos” – that is until I realized we had never discussed the album proper on AD in the past. For shame. For the non Big Star fanatics in the house, Chris Bell was Alex Chilton’s right hand man before splitting after the release of the band’s debut, #1 Record. Like Chilton, Bell was a Memphian with a serious jones for the Beatles and Badfinger.

Bell’s pop sensibilties, coupled with the intelligent songwriting and instincts that helped steer the creative direction of #1 Record, very much carried over to his sole LP I Am The Cosmos. A collection of his mid-70s work recorded prior to his death in 1978 (although the single “I Am the Cosmos” was released in 1977) I honestly find myself frequenting Cosmos more often that Big Star’s swan song Third/Sister Lovers. And yes, the John Lennon solo comparisons are completely on point (and in the best way). Lyrically the collection is at times sad, wistful, and reminiscent; as a whole the LP is proof positive that Bell was a master of his craft.

For you vinyl hounds, you can now purchase the LP in 180 gram vinyl at Amazon (see link below) or if you’re here in L.A., at Amoeba Music..