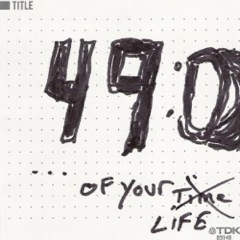 Paul Westerberg’s post-Replacements career has been an interesting one and listeners have dithered back and forth on the merits of each solo release, no two coming to a consensus on any one of them. But it was as universal a thought as possible that he had stumbled onto something good when the twin Stereo/Mono albums were released back in 2002. There was the whole pseudo-mystery about whether it was actually Westerberg, Tommy Stinson and Chris Mars playing pseudonymously on the record (it wasn’t – it was nothing but Westerberg) because of the ramshackle playing style and how, well, fun especially the Mono record sounded. Westerberg’s records had become increasingly melancholic and the whimsy of the ‘Mats seemed gone. But that’s maturing. Or so they say.

The follow ups to Stereo/Mono, the subsequent Grandpaboy album and two Westerberg solo albums, were in the same vein, but just not as engaging. Enter 49:00. Coming out of the blue, and on the heels of a protracted break from music after a screwdriver/candle wax/guitar hand accident, it was a bit unexpected. It also has a couple of gimmicks: It’s only available online and for 49 cents; it is sold as one, forty-three minutes and fifty-five second long mp3. Songs fade out as others fade in – almost like a radio station – and songs even land on top of each other, sometimes completely cutting another off, or even coming in alongside. You also don’t have the benefit of, you know, song titles, so you’re left to call them by the most oft repeated phrase. So the two questions here are: a) does all that one-track nonsense detract from the songs and b) how are the songs?

To answer the latter first, they’re great. Westerberg sounds right on the money with the scrappy, infectious energy that has informed the best of his solo material. Songs range from the sentimental rockers that Westerberg once cranked out like clockwork (“Who You Gonna Marry,” “Something In My Life is Missing”), the light-hearted and whimsical (“Visitor’s Day,” “I’m Clean”) and even a song that comes close to rivaling the most beautiful song Westerberg has written post-Replacements, “Lush and Green.” “Goodnight, Sweet Prince” is the Westerberg oeuvre in a nutshell – a gorgeous, mildly somber and heart-wrenching song that gets its overall effect dampened/amplified (depending on your perspective) by something else. In this case, no fewer than two songs come in along side the song at various points of time, giving us dueling Westerbergs for patches of the song’s telling of the death of Westerberg’s father.

So what about all the interruptions, incomplete songs, song snippets and general sloppiness going on here? The whole thing ends up sounding like a collision of old and new school – like a set of iTunes mixes that are filtered through an FM radio station being played in a car stereo barreling across several state borders, occasionally catching that elusive all-night station that sounds like heaven. Where it is slightly frustrating that some really good songs are here in incomplete form, the sheer amount of really great material makes you forget about it – you begin to understand the songs as complete just the way they are. Even the covers medley that skates through towards the end, sounding like a game of “Name That Tune,” is endearing in its indirect recall of the infamous Shit Hits the Fans performance where the Replacements couldn’t manage to get through more than about a minute of any cover song they attempted.