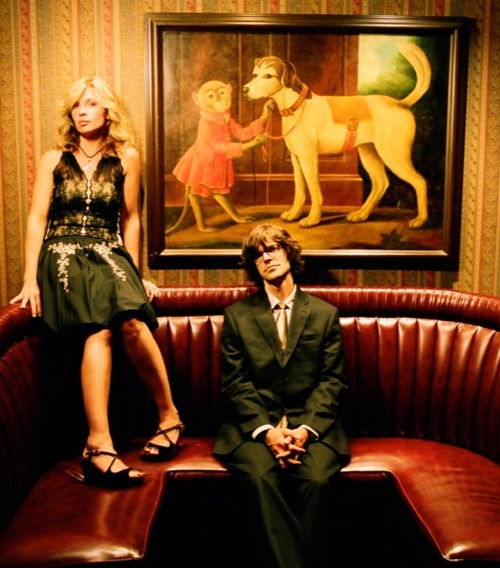 …and now, even more coverage from last week’s Newport Folk Festival. Prior to their performance, AD sat down and caught up with Over The Rhine’s Linford Detweiler and Karin Bergquist. Among other things, they give a shout out to, literally, my favorite burger in the U.S.

Aquarium Drunkard: You named the band after your neighborhood in Cincinnati, which is a pretty tough neighborhood.

Karin Bergquist: Yeah, it has quite a history and it’s experienced a bit of gentrification over the years, but twenty years ago it was a great, affordable place to live for artists who couldn’t afford anything else, and it’s a beautiful place. A hard place to live, a little dangerous, a little different for a couple of white kids from Ohio (laughs), but Linford had an apartment there and that’s where we started writing our songs. It was good. It got us out of our comfort zones.

AD: Do you think that being challenged in that way, in the sense of being pulled from your comfort zone, made you sit down and decide whether to actually go for it as musicians?

KB: We decided early on that we were gonna do this and do it to the point where we either made it and made a living at it, or we were gonna be penniless on the sidewalk. It was that kind of commitment.

Linford Detweiler: And here we are at the Newport Folk Festival! (laughs)

KB: (laughs) So, it’s just our dream, and wherever that takes us and whatever that looks like, we’ve stuck with it. Because we don’t know what else to do. We don’t know any better, you know? I think the payoff is getting to watch from the side of the stage as people like Levon Helm perform with joy. That was pretty cool.

AD: He looked so happy.

KB: We actually have a song on our Christmas record called “We’re Gonna Pull Through,” and I wrote a line that says “You hold me the way that Levon would play.” I love how warm and deep his grooves are, and I wrote this line in this love song and referenced Levon Helm, so it was cool to see him.

AD: Going back to the neighborhood of Over-the-Rhine, how important is a sense of community and a sense of place to you guys?

LD: It was really important to us, possibly to the detriment of our career, to stay near our roots in Ohio. It’s where we were born and grew up and met each other, and it seemed like it would be good for the music if we could stay where we had roots and could give the music space to find its own direction without a lot of intervention by professionals in a music city like Nashville or New York or wherever. So we kept it close to home.

KB: It’s funny because we were drawn to community in various forms and we realized that when you’re in a band and you tour in a van or a bus or whatever, you’re living in community full-time. Eventually, over the years, that shifted to us moving out to a very isolated house in the country so that we could have a balance between the community in the band [and otherwise].

LD: We did have a community: we had a photographer named Michael Wilson that we’ve used on almost all the records. We learned a lot about music from Michael. The guy who designed our record is a friend from [the neighborhood], the guy who did the website was local.

KB: He’s a great photographer; he shoots everyone from Lyle Lovett to B.B. King to you-name-it. He’s a musical influence.

LD: A deep listener. So yeah, that’s part of the reason why we never left. We had this tight-knit group of people that we looked up to.

KB: Somehow we felt that moving to Nashville and connecting with other songwriters…we definitely have some regrets there because we’d love to be able to have that at our fingertips. But the resources that we found in southern Ohio were just so rich and we felt like we couldn’t leave it behind.

AD: Do you guys write together or will one of you bring a song to the other?

KB: Yes and yes. Sometimes it’ll just come and be complete for either one of us. Sometimes I’ll get a good first line or a melody; he’s my Bernie Taupin. (laughs) Or vice-versa.

KB: And he tells me when things really suck. And I believe him.

AD: I guess the obvious question now is, being married, how does that affect your ability to tell one another that your songs suck?

KB: We’ve somehow gotten into this world of leading songwriting workshops and for the first one we ever did, we came up with a list of things we wanted to talk about, and the first thing on our list was “Don’t be in a band with your fuckin’ wife.” (laughs) And it’s kinda tricky because it’s a dance, you know, and you don’t want to lose your objectivity. I don’t think we ever did; we’ve only gotten harder on each other, hopefully, and I think we push each other.

LD: You have to learn to make space for the marriage and to take care of that, and to make space for a creative partnership, and learn to take care of and balance both. It’s something that requires experimentation. Some of our friends say, “If I had to work with my wife together as much as you guys are together, we’d kill each other within a week.” Somehow, we’ve made it work.

KB: We’ve tried to kill each other, but we haven’t succeeded yet. (laughs)

AD: I saw something on your website, Linford, where you said that every song has to be good, every album has to be great, and every live show has to be a spiritual experience and about something bigger than yourselves. That seems like a lot of pressure to put on yourself. How do you deal with something like that, and how do you manage it when you sit down to work?

LD: It’s kind of an awkward quote, but I think what I was trying to say is that we don’t want to waste anybody’s time, particularly our own. If we don’t believe in what we’re doing, let somebody else do it. If we don’t believe that we’re doing good work, we’ll just leave that space for somebody else to fill. I think the great thing about being a songwriter is that you are swept up into something that’s much bigger than yourself, whether it’s the tradition that you’re a part of or just music in general which is so spiritual and goes so deep and means so much to people. I like that idea of setting the bar high and being open to tiny miracles.

KB: It’s more for ourselves. We’ve been doing this for a long time, and we want to keep our standards up. We want to have fun, but if it’s not going to be good then we might as well just go home. We try to perpetually challenge ourselves and each other to keep growing. With people out there like Levon Helm and Gillian Welch, it’s inspiring and a great impetus to do your best work.

AD: Karin, you said that the new record is the first time that you’ve let yourself take risks vocally.

LD: She says that on every record. (laughs)

AD: Well, that’s what I was going to say, is first of all, why do you think that, and second of all, why now? Your voice sounds fantastic.

KB: I think it was with Ohio that I started to finally feel comfortable in my own skin, and that was due to the fact that we had a producer who was very affirming in a way that we needed to be affirmed at the time. It comes with maturity and it comes with accepting your gifts and owning your gifts, and once you’re comfortable with who you are and you accept that, the risk-taking part is fun. It’s the way to get to the next step, the next level. I’m just a student, and that’s okay; I’m always learning and finding new things to challenge me. And as long as music does that for me, I’ll stay with it.

AD: Your music is very serious, and — I’m tempted to say dark, but — it’s certainly more thoughtful. But I get a sense of play underneath everything. Maybe if it’s not actually in the song, I still get the sense that you guys really enjoy making the music. I was wondering how you put enough of yourself in a song to make it real but not so much that you lose yourself in the emotion of it.

LD: I like moments that make me laugh uncomfortably, moments that bring tears — sometimes from being happy and sometimes from dealing with the place where your pain lives. I like to shove it all in there, comedy and tragedy in a head-on collision. If it stops being play on some level, the life just sorta goes out of it.

AD: I was wondering about the song “Jesus in New Orleans,” from Ohio. I’ve lived a lot of my life there and I was wondering which bar you’re referring to in the song when you talk about drinking bloody marys and seeing Jesus by the jukebox.

KB: When we were recording Eve, we did part of it here in Northampton and we mixed it down there, and Trina Shoemaker, who is a wonderful engineer, took this young, scrawny white girl under their wing and took me to Port of Call and we had loaded burgers and loaded potatoes.

LD: The jukebox was loaded.
KB: Dorothy Moore on the jukebox. And my world just exploded.

LD: Whoa, that’s a good line! (laughs) The jukebox was loaded and my world just exploded.

AD: There you go.

KB: And I saw Trina at the Ryman. We were opening for Ani DiFranco and Trina Shoemaker comes strolling in — I hadn’t seen her in ten years — and she says, “I think I know this girl!” She was a mentor for me, so that song “Jesus in New Orleans” is somewhat about her, because she was kinda “Jesusing me” through a funky time in my life. And she walked in on this really strange day at the Ryman. I wanted to share [that moment] with somebody special and I’d been counting all the women who’d mothered me in my life, and she was one of them, and she walked through the door of my dressing room, out of the blue sky. So I got to share it with her. words/marty garner

Previously: Read up on AD’s previous coverage of the 2008 Newport Folk Festival.

5 thoughts on “Over The Rhine :: The AD Interview”