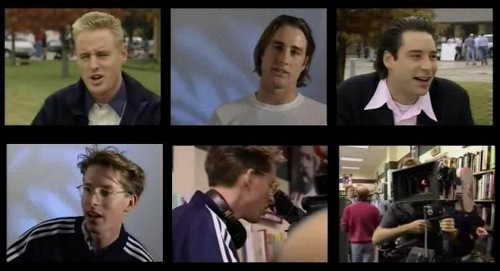 Earlier this month Goldenfiddle reminded us that the latest Wes Anderson addition to the Criterion Collection DVD series is due out November 25th. Anderson’s first feature film, Bottle Rocket, is finally getting the all-star, deluxe, two-disc reissue treatment complete with: Eleven deleted scenes, commentary by Wes Anderson and co-writer/actor Owen Wilson, the making of Bottle Rocket: an original documentary, storyboards, location shots, a big fat book, and all sorts of other miscellaneous goodies. If you’ve seen the other Criterion versions of Anderson’s films than you know what to expect. For those of you that have yet to view Bottle Rocket, all I can say is, damn, I am envious.

As this is a music blog, it is worth noting Bottle Rocket was the film that began the long-running partnership between Wes Anderson and Songwriter/Composer Mark Mothersbaugh (he of DEVO fame). Mothersbaugh has since scored every Anderson film with the exception of 2007’s The Darjeeling Limted (see: Bottle Rocket, Rushmore, The Royal Tenenbaums, and The Life Aquatic with Steve Zissou). Even casual soundtrack enthusiasts will note the prescence of Mothersbaugh’s score in Anderson’s films. It truly acts as another character, coloring the often whimsical and surreal world Anderson’s characters inhabit. Bottle Rocket also began the continuing run of eclectic artist/song choices in Anderson’s films that often work as set pieces. Due to budgetary constraints, four of arguably the best tracks used in film were left off the official soundtrack. Here are two of them below.