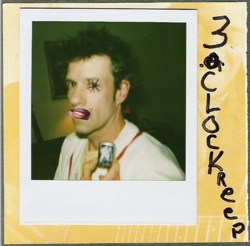 Perhaps Paul ought to drive a screwdriver through his hand more often.

Not that having Westerberg out of commission for a year was a good thing, but ever since his accident, he has come roaring back with a creative vengeance. First the copyright infringin’, vying for best post-Replacements album 49:00 was dropped on us, followed closely by another independent song, “5:05”. Now, after all the fluster over those releases come the 3oclockreep EP/album(?) and another individual song, “Finally Here Once.”

3oclockreep is a similar creation to 49:00 – songs land in and on top of each other, cut one another off, veer from one style to another. It plays like bits of leftovers and the few songs that do come through, while really solid, are like the lesser songs on 49:00. The real point of interest starts a little before the halfway mark.

The piece starts to sound like a revisiting of Westerberg’s past work, not his new stuff, as various things like the chorus of the Westerberg-penned/Goo Goo Dolls-recorded “We Are the Normal” float in at different points. At about the half way mark, Westerberg starts in on what sounds like several aborted versions at the early-Replacements classic “If Only You Were Lonely,” never getting past the first line without muffing the lyrics. As overlapped laughter and mumbled curses and attempts to start the song layer over each other, a voice starts to cut through the clutter of Westerbergs.

It’s Tom Waits. I mean, it has to be. I don’t know who else sounds like that. The two of them banter back and forth about barely discernible things before settling in on an attempt to do the Replacements’ rarity “We Know the Night.” They stumble through the song, but the result is even more mesmerizing than the gorgeous original. That’s largely because of knowing the original – without context, this song would simply be a mess. But here it works. Tom and Paul wind things up with a bluesy stomp that takes up most of the back fourth of the twenty-minute recording. To hear two men, separated by a decade or so, both songwriting legends, working together (for the first time since the Replacements’ 1989 b-side “Date to Church” at least) is nothing short of fantastic. “Finally Here Once” is vintage Westerberg: all beautiful music, perfectly fractured lyrical vignettes and infectious chorus and a great salve to the mess of 3oclockreep and the frustrating unfinished masterpieces that dotted 49:00.

These releases have sparked a lot of debate over what exactly Paul is up to, but whatever his intentions, the result has been fiercely unique, fantastic and an absolute delight to hear. words/j neas