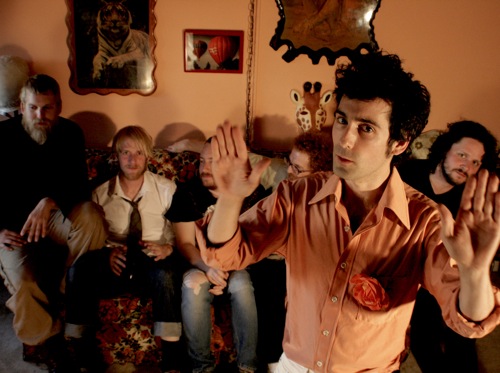 Blitzen Trapper is one of a handful of bands that we’ve constantly referred to as refining and exploring classic rock traditions in a new way. AD sat down via phone with Blitzen Trapper front man Eric Earley to discuss their first major-indie release, comparisons to Pavement and Dylan, archaic words, and that special confusion that is uniquely American.

Aquarium Drunkard: Furr is Blitzen Trapper’s first record for what I guess you’d call a ‘big indie’ as opposed to a smaller label. Can you talk a little bit about how you got hooked up with Sub Pop?

Eric Earley: It’s pretty simple, really. We recorded Wild Mountain Nation last year and when we made that it got shipped to a bunch of different people. They were one of several different labels who were interested in us. They basically gave us the best deal, you know. And they’re pretty local – they’re a Northwest label. And they’re just really cool people. We wanted Wild Mountain Nation to come out at a certain time, so they didn’t end up putting that out.

AD: Why did you want that out at a certain time?

Eric Earley: Because we hadn’t put out a record in a long time and when you get involved with a label, all the time frames get pushed back. We had already been pushing forward, putting it out ourselves, you know, by publicist and doing radio and all that stuff. So we just decided to do it ourselves and do Sub Pop for the next record. It just made more sense and it’s better in the long run because we learned a lot by putting that record out ourselves. It was definitely a good experience.

AD: Something a lot of people saw in Wild Mountain Nation, and maybe that’s what Sub Pop saw as well, was this kind of mad scientist, genre hopping – and the record it kept getting compared to was Pavement’s Wowee Zowee – not necessarily in sound, but in the feel..

AD: How much of that was a conscious decision and how much of it was ‘oh, we like this’ and ‘we like that’ and sort of putting it all together?

Eric Earley: I guess it’s jumping genres. It’s all just American music to me. It definitely jumps from hard rock to country, but I feel that everything on that record is related to each other. It’s not like we were doing African tribal drum beat and jumping to klezmer. It wasn’t as consistent as other records, that’s for sure, but it wasn’t on purpose, that’s just kind of how I like to operate writing songs. I just don’t like it to be the same thing.

AD: So how does the structure of Furr compare to that one?

Eric Earley: I think it’s more consistent, but I don’t know. The new record also jumps from folk to country to hard rock to almost r&b groove stuff. I think it’s genre bending, but it doesn’t feel like it because the production on it is more advanced and it’s more consistent. The whole conversation just goes back to my attitude toward songs and I don’t relate to music so much as genres but as songs. I feel like a song is its own singular universe and I like to treat songs singularly and not in relation to other songs I’m writing. I like to make each song its own world.

AD: Would you say in that sense that you’re more of a single song writer than an album writer?

Eric Earley: Yeah, I think I am, but at the same time, at the end of the day, there are a lot of people around me who put the record together and make it sound decent. [laugh] I think what I did with the last two records is I wrote and recorded a bunch of different material and then people in the band, friends, people at the label helped put together a group of songs that sound good together. That’s all a record really is.

AD: This is the first time you’ve released an album in back to back years. Was there a pretty short turn around between Wild Mountain Nation and Furr? It seems that way as far as release schedule, but were they actually written that closely together?

Eric Earley: Honestly, there aren’t really any breaks in my songwriting. I’m always writing. There was a record made between each of our records that haven’t been released, so there’s a lot of extra material. Then again, it’s not like I made Wild Mountain Nation and then I made Furr. I just am always recording material when I’m in town and pulling from it to make records.

AD: Your show was packed at the Monolith Festival and, maybe you’ll see the effects of this more in the coming months, but have you already seen your shows get larger over the last year since the last album and building up to the new one?

Eric Earley: Oh, yeah, definitely. Wild Mountain Nation got a lot of good press initially and we toured a lot and were able to build good audiences in big cities and places around the world. I am curious to see what it’s like to release a record on a big label like Sub Pop and see what affect that has. We’ve definitely seen big crowds and with this new record, people seem to love the song “Furr” for some reason. People love to sing along. [laugh]

AD: Picking at that song for a minute, I would compare this album, aesthetically, to a record from earlier this year – Dr. Dog’s Fate – that they both seem to do this amazing job of, in a very modern way, mining these very classic American music styles. And the comparison I picked out most for yours was that the album sounds like many different phases of Bob Dylan. “Furr” was the first song that stuck out to me like that. Were there any particular artists or sounds you had floating around in your head when recording this album?

Eric Earley: Oh, yeah. I was definitely thinking about Highway 61 and the production on that. I think a lot of the influence on this record, tonally, are from Dylan. And Fela Kuti, strangely. I’ve been listening to a lot of dub stuff, so on a song you hear a lot of these tape echo, animal sounds, and all these delayed kind of things. I think it’s all me listening to King Tubby and saying like, ‘wow, I wanna try that but I want to try it with folk music.’

AD: You also have songs like “Black River Killer” that have these lyrics that seem purposefully archaic in their phrasing. You don’t do this in all your songs, in fact that’s why it stuck out to me more. But in writing, do you not only adjust your music approach but your lyrics as well? Are you setting yourself inside characters and the feel of a piece lyrically also?

Eric Earley: Yeah, there are songs like “Furr” and “Black River Killer” where I’m telling a specific narrative. I want to get into – I’m trying to create this character and I’m using the language and the sound, even, of the song goes along with using this archaic language. It just seemed to fit. [laughs]

AD: That’s the song that reminds me of John Wesley Harding.

Eric Earley: Yeah, it’s that real simple drum, acoustic, bass with vocal, you know. But I wanted it to have a little chronic with it, so I threw that Moog in there. I feel like that one is sort of, almost a hip-hop, spaghetti western thing. I think in my mind, I was really trying to make the musical equivalent of a Cormac McCarthy novel. That’s really what I hear, this sort of violent, American thing, but at the same time it has this sort of redemption in it that is confused because we’re American. words/ j. neas