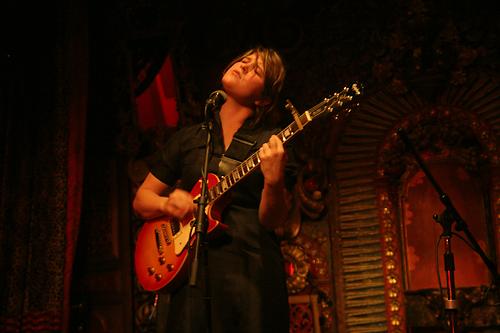 AD caught up with Blair last week from her home in New Orleans where the singer-songwriter is finishing up her debut LP, Die Young. Think: Feist meets Neil Young at a bar owned by Dolly Parton where the house band is Radiohead. Among other things, we discussed the five-year process of recording Die Young, and how New Orleans has – or rather, hasn’t – made her the musician she is.

AD: So I really dig the new record; I’ve been able to hear an un-mastered version.

Blair: Oh really? Great, that’s good to hear, it’s these little things you create in your room, they’re these weird little processes and I guess it’s time to get it out to people. It’s almost like you’re losing it, you’re giving it away.

AD: Why do you think New Orleans, your hometown, hasn’t become a bastion for rock or indie rock? It’s such a musical city, but it’s not known for the kind of stuff you’re doing.

Blair: I know. I know it all too well. I think it is the South and the environment is one where people like to stick to their habits. It’s a city of funk and jazz. A lot of kids move here and that’s what they want to play, that’s what they want to learn. It’s just a tradition; I think kids just pick up horns before they pick up guitars. The local press is more supportive of those other genres. There’s a few fan zines here that support rock music… all I can figure, every aspect of life, it just kinda puts ear muffs on, you know? Just ignores trends and anything outside of here. Once you’re here it’s easy to not leave, a lot of people just plan to come here for a few months, and then stay for years.

AD: A lot of the press you get mentions your age. Do you ever get sick of people feeling the need to say, “The 25 year old Blair…”

AD: Considering that you have been playing so long, when did you realize that you had a knack for singing as well as playing?

Blair: I first started playing guitar when I was 10, on my uncle’s guitar, so I liked that. I took lessons. I learned how to play bar cords. Then I learned Nirvana and quit lessons, like, “Why do I need anyone else?” I didn’t realize I could sing, I didn’t know I had a good voice, just some people told me a I did. I guess at 15 I started making those two things together, and songs seemed to form… It was a synthesis of whatever the art-form of pop songs are. I love pop music and it’s really all I listen to, that’s probably why it came out of.

Bair: (laughs) Yeah, what’s all that about?

AD: Yeah, what is that all about?

Blair: It really popped into my mind. I spent a few months in California, I was really isolated, living in Orange County with my uncle. I started looking at the names of the songs [on the record], “Murder,” “Kamikaze,” “Rampage,” stuff like that. The violent imagery, I think it’s like a manifestation of emotional turbulence… it’s not a thing to live by…

AD: Nothing to do with being a closet Billy Joel fan?

Blair: (laughs) No, I like Billy Joel. I like Elton John, I feel like you always need to put those two together and I’m about Elton. What’s the song, “Only the Good Die Young?” It’s a romantic phrase. It’s very morbid, this fascination with things being frozen in your youth… “get it over with while you’re young” not actually dying, but like, get rid of all the dreams.

AD: There’s a real urgency to the album, your voice is countered often by driving guitars and drums… how has your sound evolved from more than just one person and a guitar? How do you go from just being someone with a guitar to a full orchestration?

Blair: A composition… I fool around on GarageBand, things like that, with parts, with melodies. Sometimes I just hear a song and I hear a beat the way it should be. This particular record, all the accompaniment on was done with a friend of mine, Keith Ferguson, who produced it. He was in a band called World Leader Pretend. Another guy, Adam, I’ve been playing with for seven years. They’re better instrumentalists than I am, so I can come up with these parts and these ideas and they can understand them. I can bounce ideas… definitely it’s the good musicians I play with. I’ll listen to certain records over and over, like, ten times in a row, just soak it up. I don’t know how it comes out, it’s not just something I’m listening to at the time. The guitar, the piano, it’s a single instrument. You need to mess with the tempo, you could have a song that rocks led by a classical guitar, trying to be innovative and work with other talented people.

AD: Can you speak more about the actual production of the record?

Blair: Well, really, it’s about five years worth of song writing. I made a recording when I was in college. I’d had these songs since I was like 21, I recorded them then and didn’t like how they came out. On this record, I probably wrote the songs in New Orleans in my younger twenties, and I wrote about half of them when I was in LA, secluded and playing shows. I took out a loan, I knew I had a certain amount of money, I was able to record the drums and bass in a nice studio. I came back to New Orleans, I wanted to work with people who I really trusted. You can live really cheaply here. There’s a lot of gear here, gear heads, Righteous Babe Records let me borrow a bunch of mics. We made a home studio for about two months, had a lot of technical difficulties. And everyone involved, we have full-time jobs, doing all kinds of other things. The actual length… we did the whole record first with a drum machine, then we gave the drum parts to drummers, we had a few different drummers on the record. The whole process took about three months. The vocal booth was in a friends house, in the closet, insulated with a mattress. A very do it yourself record. We were lucky enough to rent high quality equipment for a low price.

AD: I don’t think anybody could listen to this record and really go, “She’s from New Orleans.” It is a musical city, but it’s gonna come as a surprise that this sound comes from there. Do you think you were influenced by the local music, or did you rebel against it perhaps?

Blair: I picked up a guitar and the music that was playing in my house was a certain kind of music. I took to those three or four minute songs.

I’m more influenced by the surroundings of the city: it’s surrounded by water, it’s under sea-level, everyone is sort of drifting. Maybe I rebelled, what I can I say, I never really feel like popping in a Miles Davis record or Louis Armstrong. It is an amazing art-form, but there’s something in my mind, it wants an awesome melody that repeats.

I also think that it’s interesting because there isn’t a real rock scene. There’s kids trying to make one — I don’t want to put that down — but you’re isolated. No ones trying to be cool here, it’s actually a big part of New Orleans, there’s actually not a hipster scene, there’s not a status quo, there’s not a bunch of bands playing, competing every night, you’re in this little bubble. If I gave you a mix of five rock bands from here, they’d all be different. There’s not this underlying vein of what is driving everything. The city is nostalgic.

AD: What are your favorite Neil records? And why Neil Young?

Blair: It was played in my house. It was really my first introduction to melodic songs. I listened to Neil Young when I was younger, when people ask what are your main influences, you feel like those are set in stone. It feels like when your listening to contemporary things, you think that’s a fad, or… in two years, “I don’t even listen to that anymore.” But Harvest is my favorite Neil Young record.

AD: One of the songs on your new record that really sticks out to me is “Candy in the Kitchen.”

AD: In a good way! It has something that the other songs don’t. It’s a much more poppy, dancey song, how did you decide to do that? And how long ’til a world famous DJ remixes it and it’s huge in Europe.

Blair: Let me tell you I can’t fucking wait! I wrote that song in ten minutes, came up with this chord change, I wanted the lyrics to take longer. I put it in GarageBand, like the initial demos… and there’s crazy sounds in there, like, a lot of things you hear in rap songs… the original version sounds very similar to the one now. The guy who produced it asked me if it was a joke. I was like, “No!” Here where I grew up, people still listen to FM radio. There’s a station, B-97, that’s what they play – pop songs that seem shallow but I think they always really resonated with me. I like the Junior Boys… the paradox to that is that I can’t imagine myself in a club dancing, I’m too much of an introvert socially, but like, I wish I could. I wish I could go out there and dance the night away, but I just can’t.

AD: Correct me if I’m wrong but you were a philosophy major in school?

Blair: Yeah, see, I wanted to make sure that if this music thing didn’t work out I had a real money maker to back up on. People need to think about things… so…

AD: Favorite philosopher, and why?

Blair: My favorite philosopher is Nietzsche, it’s very cliché… I started liking him when I was younger for the reason that everyone does: it’s angsty and all that. I veered away but since I’ve been back in New Orleans I’ve been reading a lot of it… I should stop, I don’t think it’s healthy. He’s my favorite because I actually like the way he writes; it’s dramatic and argumentative. I think the substance of what he writes embraces the joys and the horrors of life very, very fully, to acknowledge that shit can go wrong, shit is bad. But then once you embrace that, if you can keep living and go about your life then it’s a much fuller life. He brings to the table, obviously intensity that I identify with. He’s known for God is dead and all that, but I think he’s just a realist.

AD: What is the question you wish people would ask you?

Blair: I guess maybe it pertains to this record, I’m just starting to listen to this record, I listen to the sonic quality for a long time, what instruments to put on it… I’m putting it in my car and it’s the finished product, I can step outside of myself I can hear these songs and be like, what happened to her? Something about how these songs came about? I don’t know if there’s an answers. If I read a book or listen to a record that really affects me… where to start, how did this come about?

AD: Do you think you can answer that for this record, or is it too hard right now?

Blair: I think I know the answer… the answer is the record. That’s probably the purest form of that answer. words/ b kramer

3 thoughts on “Blair :: The AD Interview”