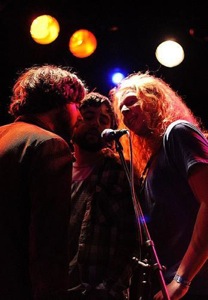 In a perfect world we want bands to be big, boisterous, and musically varied – able to pull off a quiet riot or a harmonize on top of thunderous guitars. In truth, we want music that throws us for a loop but never throws us away. All so we’ll return the favor.

Enter The Moondoggies and their debut record, Don’t Be a Stranger. As soon as people start grabbing onto this band, the comparisons to the past and present will be lush and many. First you’ll hear The Band. Maybe next The Hold Steady. A lot will be spoken of Seattle. Of the long lines of bands from the North playing something called “Southern Rock” as if the two never mixed back and forth.

If you read this site, if you read music magazines, if you listen to bands talk about other bands, you’re familiar with a concept I call “The Meeting.” “The Meeting” is the clever way of trying to describe a band using other bands: if this band met that band in this place, it would give you this new band.

And you’re going to hear a lot of that. But no one will be right. The Moondoggies fit too many categories too well. They need to be digested, listened to reportedly; not by force to enjoy or finally “get” a record, but by sheer joy and freshness.

The Moondoggies are easily on their way to being one of the bands another band met along the road. And Seattle still rocks. The Moondoggies are The Band and My Morning Jacket. They’re Southern Rock meets The Arcade Fire in an elevator when Belle and Sebastian get on with their arm wrapped around The Grateful Dead. I.E., The Meeting. words/ b kramer

8 thoughts on “The Moondoggies :: Don’t Be a Stranger”