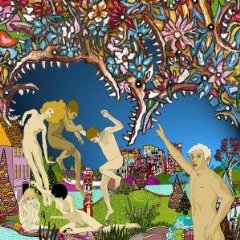 Have you spent some time with Skeletal Lamping yet? It is a pan-sexual, sound collage, romp that with its feet firmly planted in the present, manages to sound inherently retro while looking towards the future. It’s an interesting listen to say the least, not to mention complicated and polarizing. I’m of the opinion that the album, and its live counterpart, are a success – in both their execution as well as the synthesis of motifs and themes that Kevin Barnes has been flirting with for years. This is it — it is all here; laid out, bare, raw and primal. Is this an album that will win over new fans? Probably not. Is it the next logical step for Barnes? Absolutely. AD’s M. Garner has a different opinion of the work, below, which makes for an interesting conversation (caveat emptor: Hissing Fauna was AD’s second favorite LP of 2007.) Let’s continue that conversation in the comments — let us know your opinion of Skeletal Lamping, both as a singular work and in the context of the Of Montreal canon. – AD

For a moment, though, let’s not think about fucking, or even about of Montreal’s newest record, Skeletal Lamping. Let’s think instead about of Montreal’s last record, the terror-disco Hissing Fauna, Are You the Destroyer? That record’s centerpiece was the twelve-minute “The Past is a Grotesque Animal,” a gnawing, snarling beast of a song that eventually eviscerates all its own pop sensibility and eats itself. That song writhes and twists around a series of increasingly bleak philosophical musings from Barnes, who was at the time of the recording separated from his wife Nina, and eventually culminates in a series of sarcastic “woo-oo”s and Barnes muttering the lines “Let’s just have some fun. Let’s tear this shit apart. Let’s tear the fucking house apart.” There is a dissonance there between the words that Barnes is saying and what he means, and that dissonance shimmers down through the trashcan beats and the pulsing of the blacklight. The drum machine may be popping but Barnes is just shuffling around in his chains.

That moment — five minutes and twenty-one seconds into “The Past is a Grotesque Animal” — is the very instance that everything changed for of Montreal. Hissing Fauna was the group’s best selling record to date (though Skeletal Lamping has already charted better), and the subsequent tours found Barnes and his band playing to increasingly large and ecstatic audiences. The Of Montreal live show, which was always spinning with spectacle, became something of a dark dance party, a stroby celebration of meaninglessness that was at equal turns compelling and terrifying. This was dance music, but unlike previous of Montreal records, it was completely devoid of joy.

Now, back to Skeletal Lamping. You may have read that there is an awful lot of sexuality on this record. You have read wrong. Sexuality implies some sense of joy, some type of connection between two human beings — if nothing else, at least a glance into one another’s eyes. The sex on Skeletal Lamping — and I’m even loath to use the word “sex” to describe it — is completely lacking in joy and enjoyment. It’s sex for sex’s sake, compulsive and grey and without any smiling. This is certainly nothing new in pop music (far from it), but it is indicative of something that moves below the deeps of this record; Of Montreal’s nihilism tells them that our actions have no meaning, but the emptiness of these songs seems to suggest otherwise. Oddly, Georgie Fruit, the black she-male character that Barnes created to deal with his sexual frustrations and longings, seems to sense that there is life beyond fucking, that perhaps love exists if only he could get past all of the fucking. In “St. Exquisites Confessions,” one of the record’s few vulnerable moments, Barnes-as-Georgie moans that he “functions on the lowest human level” with genuine mourning. Of course, the line is buried in the musical equivalent of a dick joke, making it all the more telling.

This de-reconciliation between actions and their meanings is the skinny meat of the record, stripping away the fun and joy that made of Montreal a compelling band in the first place. What we’re left with is something thin, something like a scientist moving the limbs on a skeleton and insisting — to his audience, but more importantly, to himself — that it’s dancing. Hissing Fauna told us that nothing matters, so we may as well fuck one another; Skeletal Lamping shows us exactly where that takes us. 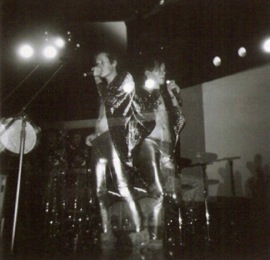 In some ways, then, this record is an absolute success, if only because it incarnates its guiding philosophy so well. Though it wears the clothes of intrinsically “fun” music (there are plenty of drum machines, disco beats, and Prince-style guitar rave-ups), the whole thing is, well, not much fun to listen to. Melodies flutter in and out their tracks impatiently, song parts seem razorbladed together artlessly, and the entire thing is sequenced with all of the clunkiness of a late-night radio station’s crossfading. This is what happens when our heads take over our hearts’ territory.

It’s not that there aren’t highlights: things start promisingly enough, with a marshmallow chorus of Barnes’ thanking his lover in “Nonpareil of Favor,” segueing into a wall of bashy guitars that somehow solidify into background squall for a grooving drumbeat. “An Eluardian Instance” mines Broken Social Scene’s horn parts and some soft dance patterns to excellent effect, and the cracks in Barnes’ lamp begin to reveal themselves in the mostly-acoustic “Death is Not a Parallel Move” when he moans “The identity I composed out of terror has become oppressive now.” It is these minor revelations that provide Lamping with its light, its aching sense of more, and they leave us with that same longing.

Effectually, though, Skeletal Lamping spends most of its time treading water in the TV-greys between actions and words and their meanings; despite Barnes’ rational hangups, he can’t escape the fact that all of his actions do indeed have meaning, that there is more to human sexuality than mere fucking. He may want us to think that it’s all a sexy party — and he may want to think that himself — but it clearly isn’t, and Skeletal Lamping feels thin as a result. After sixty minutes of climax after climax, of bed-shaking genre-hopping and musical bits and pieces mixing and bumping and sucking on one another, you’re still left resting against the headboard, wondering, “Is this it?” words/ m garner