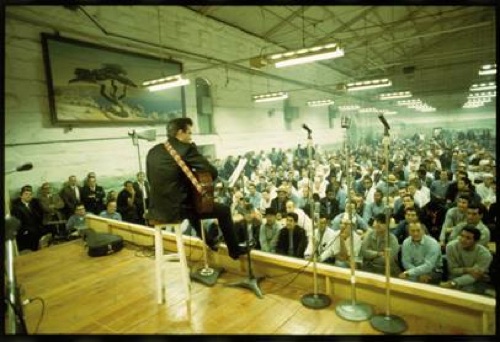 Perhaps the true test of “a legend” is when, even in the midst of total and complete over-saturation, their legacy remains untarnished and beyond reproach. If so, when it comes to music (and his role as a general pop culture icon), Johnny Cash is a prime contender. Now, two years after his big screen portrayal and the release of the Sony Legacy edition of Cash’s 1969 stint At San Quentin, Sony rolls out the red carpet for its Legacy edition of Johnny Cash At Folsom Prison. Like the San Quentin reissue, this album has previously been released in multiple formats, but with two CDs, a book and a DVD, one cannot argue that (for the completest) this is anything but the definitive treatment.

The first disc houses the faithful sixteen-track album as it appeared upon its original release, only uncensored with the expletives now left intact, plus seven bonus tracks from the show that were cut from the vinyl release. The second disc features the second show Cash performed at the prison that day that, until now, was commercially unavailable. The DVD, though, may be the real carrot for die-hard Cash fans as it provides a behind the scenes look at that day in 1968 where Cash cemented his left-of-the-dial, outlaw, image and lasting legacy. The man in black.

Noteworthy: In addition to his performances at U.S. prisons, Cash also performed at the î–sterî¥ker Prison in Sweden in 1972; the companion live album Pî¥ î–sterî¥ker (“At î–sterî¥ker”) was released in 1973. Between the songs, Cash can be heard speaking Swedish, which was greatly appreciated by the inmates. (via)