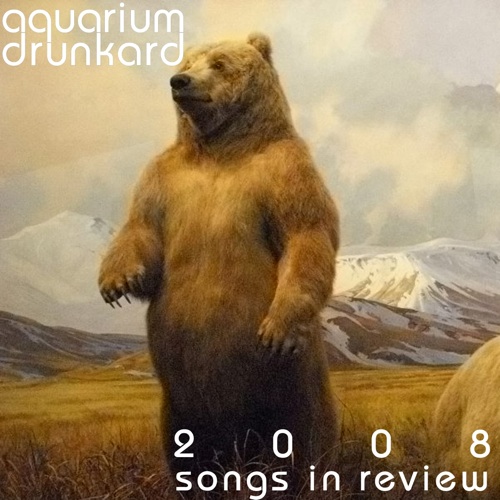 This year Aquarium Drunkard is wrapping up not only our favorite albums of the year (stay tuned for that) but listing some of our favorite songs from the past twelve months as well. Besides a site re-design, the blog also saw the the addition of a couple of regular contributors, J. Neas and M. Garner, whose lists you can find below my own. While you’ll notice some repeat artists (Deerhunter, Hold Steady, etc), there is only one repeat song n the three lists. We can;t hear it all, so hit us up in the comments with your favorite individual songs from ’08. – AD

Now a few releases into their game, “Set In Stone” finds Catfish Haven continuing down the garage rock path while incorporating STAX styled horns and a touch of mid-period Talking Heads into the mix. This is the cornerstone track from an album that revels in sweat, booze, and balmy humidity – a perfect storm where everything just barely hangs together, and in doing so approaches an unlikely dirty perfection.

I’ll tell ya, if I didn’t know better I would swear “Frankie’s Gun” was a lost b-side from The Band circa 1970. It’s nice to know you don’t have to visit Big Pink to get this kind of stuff in 2008. It is no coincidence this track pops up in the next two lists as well.

Mmmm, rock & roll. This Seattle outfit delivered the goods this year with “Changing” off their Don’t Be A Stranger LP. This is very much back-to-the-basics in terms of both the sound and the songwriting. This is the new Americana. I recommend turning this one up loud.

Produced by the Black Keys’ Dan Auerbach, and tourmates of Dr. Dog, it’s no surprise Hacienda grabbed my attention last Summer. “She’s Got Ahold On Me” finds the San Antonio group milking the highlights of the past four decades of rock and pop. Like a lot of my favorites this year, this one’s a smiler that could have easily dropped thirty years ago.

As an old fan of The Raincoats, Vivian Girls had me at first listen with their brand of Phil Spector girl-groups soaked in dirty basement Velvet Underground. “Where Do You Run To,” with its multi-tracked vocals, chugging rhythm, and lo-fi coy naivete, will hopefully inspire a whole generation of teenage girls to pick up vinyl and guitars.

No Age’s Sub Pop debut, Nouns, immediately reminded me of the first time I heard Sonic Youth’s album Evol: a perfect din of noise framed by pop sensibilities that in turn keep everything (barely) hanging together. “Teen Creeps” is the natural “single” from the LP and track I’ve listened to countless time in ’08.

I’ve been a sucker for story-songs this year and “Black River Killer” is a murder ballad in the grand tradition of Porter Wagoner, and, more recently, Nick Cave. “Oh when, oh when, Will the spirit come a calling for my soul to sin?” This band just keeps getting better.

This is dream pop. Track two off Deerhunter’s Microcastle, “Agoraphobia” slides in immediately after the opener, “Cover Me (Slowly),” so subtlety it practically feels like an extended coda upon first listen. So yeah, technically it’s two songs, but you can’t truly experience one without the other. Buy the album to hear why.

At five minutes and fourteen seconds “Find Your Mark” feels more like an album than a song. The track is a journey, and one that incorporates influences ranging from Brian Wilson to contemporaries Besnard Lakes and Akron/Family. A North Carolina mini-masterpiece. Keep an eye on Megafaun in ’09.

White Hinterland, Casey Dienel’s 2008 project, saw the artist’s vocal approach moving in more of a Rikki Lee Jones/Joni Mitchell (jazz-era) space than her previous work. “Dreaming of Plum Trees,” with its aforementioned flourishes and traces of Vince Guaraldi, earned itself the title of “new classic” during the past twelve months. Might I add it is perfect for December.

I’m not typically one for electro future-funk, but the son of an Australian preacher man delivered a thick curtain of black velvet, wrapping itself softly around deep existential soul. Sparro sounds like a radio-ready Tunde Adebimpe, which puts him in good company with number nine.

Dear Science’s thesis statement — and what should be all means become the siren song for postmodernism’s re-embrace of the nonrational — does its shakin’ best to free the mind of the indie masses, in desperate hopes that the ass will follow.

2008 found Los Angeles’ current most-famous punks’ name splashed on the outside walls of MTV’s Time Square studio, and “Eraser” is part of the reason why; the runny-nosed child of Loveless and blink-182, it’s a study in pop droning. Dig the harping acoustic guitar that holds the song up once they finally kick it.

I’m not going to sit here and tell you that T.I. has anything important or creative to tell you. Hell, there’s a reason I chose the radio version of this one. But he does have what Lil Wayne is missing, and that’s pop hooks. “Whatever You Like” is, at least sonically, undeniably good candy.

(see above and below)

“My Favourite Year,” from Trouble in Dreams, captures a fluttery, uncertain sort of thought on the past, equal parts history lesson and celebration, with Dan Bejar as grand narrator. As the trilling guitars pull open the curtain, you can hear Bejar’s voice sweep its hands across the scene.

Hey, drums! It’s good to hear you again! Even with the shouty vocal harmonies and sticky thump that makes acoustic guitars sound more like a percussion instrument than traditional folk accompaniment, it’s the pulsing African Ewe drumming of Logan Kroeber that pushes this song far forward.

3. Deerhunter :: Nothing Ever Happened

Hey, guitars! It’s good to hear you again, too! I played this song more than any other this year, for no reason other than the way Deerhunter layer and drizzle their guitars all around one another in head-nodding affirmation. The band seem to have melodies to spare, and an exceptional handle on how to blend nostalgia, hope, and love buzz in equal measure.

Only Nick Cave can wrap the resurrected Lazarus up in the the soft yellow hair of lovely ladies in San Francisco, hang him among the pale yellow sky stars of L.A., and drop him into a New York City soup queue before finally dumping him back into the grave, all while the Bad Seeds grind out a sloppy, undead version of “Louie, Louie.” And only Nick Cave can do it with such conviction that it actually becomes reverential when he shouts, “I don’t know what it is, but there’s definitely something going on upstairs” in the chorus.

You kinda wish that every Hold Steady song sounded like this one. Not that all the other songs on Stay Positive aren’t great — it’s just that you sorta wish that every song ever sounded like this one. “Slapped Actress” opens with layer upon melancholy layer of Tad Kubler’s guitar and twirls from Franz Nicolay’s piano before Craig Finn begins spinning together his lyrics. This is a song about everything — aging, art, hero worship, religion — and the frayed-worship “whoa-oh”ing backup singers seem to know what Finn’s talking about. And what he’s talking about is the Hold Steady, about how rickety a pedestal fame can be. Finn sees light at night through his black-framed glasses; he sees the way that his fans approach the band on scabbed knees, their eyes open like a eucharist, fire consuming their hearts. And while Finn’s relationship with Catholicism is tricky at best, he’s smart enough to know what happens to people who accept their gilding. “Man, we make our own movies,” he sings at the song’s finale, and while some Hold Steady fans have taken this writ to signify that we create our own reality, it’s worth remembering that Finn is talking about the difference between reality and what happens on a stage. After all, movies are pure fiction, a staged version of something that’s really there. And yet, sometimes a bit of flesh seeps into the celluloid, as Finn would readily admit. Sometimes actresses get slapped.

In a year that saw a dramatic shift in American politics, “Halleluja” feels like a song that perfectly nailed that feel of pins-and-needles leading into November. The lyrics – tense, uncertain and pleading – and the music – driven, hopeful and surging – were juxtapositions so natural that listening felt like living the day to day. In hindsight, it is even more uplifting.

9. Birdmonster :: Born to Be Your Man

There’s something about yearning. If there were a patron emotion of indie-rock, it would probably be ‘yearning.’ “Born To Be Your Man” is one of those songs that yearns like there’s no tomorrow. All in hoping that there is a tomorrow – with you. Yes, you.

There’s something majestic about this song. And it first hits you right around the time the multiple voices layer onto one another entering the first chorus. Hints of shoegaze and the Red House Painters and wondering just what it means for something to ‘read like a number.’

7. The Hold Steady :: Sequestered in Memphis

Is it the stories? Craig Finn tells great stories and this is certainly another in that line. It also has one of those instantly memorable and repeatable choruses. This is everything rock and roll is meant to be. Handclaps, guitar licks, chants and energy. You can listen to this story over and over.

Admittedly it was the live performance of this from the Pitchfork Festival that really won me over, but there’s something to be said for such a note-perfect genre band like King Khan and the Shrines. Down to the recording style and instrument sounds, this is soul and r&b and everything between.

Sugary, ridiculously quick, jangly and sharp. Infectious defined. There’s nothing incorrectly placed in this song – every note, every word, every ‘woo-oooh.’ If only radio pop were ever really this perfect..

Like the looser, funkier, more funny version of “Knockin’ on Heaven’s Door,” “Frankie’s Gun” is sharp story telling that doesn’t sound forced or anything less than a man, gamely laying on his death bed (death ground?) relating his will one shaggy story at a time.

I missed Social Distortion. I missed X. I missed every smart, open minded punk band that ever knew that roots-rock, country, folk and punk had a lot more in common than others thought. “Young boys / young girls / ain’t supposed to die on a Saturday night.” If it were a pose, it wouldn’t be nearly this good.

I named the Broken West’s “Down in the Valley” as my #2 single of 2007. “Perfect Games” is not “Down in the Valley.” It doesn’t need to be. It’s glimmering and shimmering, propulsive and yearning (there’s that word again). “We sit around looking for flaws in the diamonds.” Keep looking. I haven’t found one yet.

Here’s what I see – a train chugging along the line, an open railroad car, an upright piano being tickled by a vaudeville looking performer, the funkiest drummer on that side of the 1920s, flashes of electric guitar and bass. The train goes sailing off the end of the track, soars into the sky as the song’s sheer pluck fuels it. It could be that I had paid no attention to this band prior to hearing this song, but no other song took me as much by surprise this year. It’s so pleasant to still be this bowled over by music.