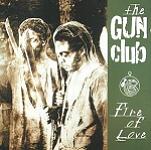 Alejandro Escovedo’s cover of Gun Club’s “Sex Beat” has been posted here before and played many a time on my radio show over the years as well. Why? Because like any good re-interpretation, it takes the song’s bare essence and spins it until it becomes something entirely different – and yet it hangs on to the the original sense of purpose the songwriter intended.

On the 1981 original we have Gun Club’s Jeffrey Lee Pierce’s composition in all it’s glory – spewing its cowpunk drunken menace right through your speakers. The tune sounds as unhinged as Pierce’s personal and public life.   Nearly 20 years later Escovedo, no stranger to the early L.A. punk scene himself, takes the song and truly makes it his own. Slowing it down to a sludgy, languid, pace of drums, strings, and eerie guitar phrasings, Escovedo tells his tale in an almost speaking voice over the instrumentation. Chilling results.