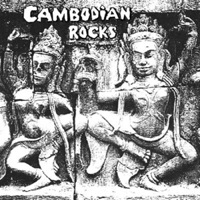 I was recently given a vinyl copy of Dengue Fever’s second album Escape From Dragon House; an LP I hadn’t listened to since its initial 2007 release on CD. One component that has long been a feather in their cap is that they not only excel at furthering the sound, and underlying soul, of Khmer, but in turn expose more people to the roots of the very music they are paying homage to.

Prior to Dengue Fever there was a widely circulated semi-bootleg entitled Combodia Rocks which gathered up a dozen or so late sixties and early seventies tracks found on random cassettes, many without the name of the artists and song titles. I say semi-bootleg as the collection was sold on compact disc for a time (apparently not in eight or so years). Not unlike reggae, thousands of miles away in Jamaica, these Cambodian musicians were being exposed to an exceptionally wide array of Western influences (in an accelerated time frame) including a lot of American and British rock & roll and pop. The following tracks are there answer to what they heard and it could not be more fascinating. Far from just an aural curio, or an exercise in cultural appreciation, some of these tracks are as vital as what you’ll find on your old copy of Nuggets.

Word of note: Since the release of the Cambodia Rocks bootleg another company apparently co-opted the name and has released a numbered series of compilations (all searchable on Amazon). I cannot speak to the quality/validity of any of these as I’m not at all familiar. Are you? If so, hit us up in the comments below.