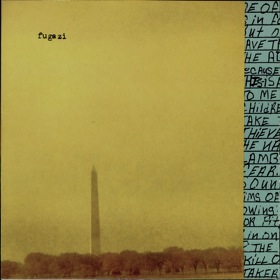 Album artwork: Does it indeed affect our listening experience, and if so, how? Scratch the Surface is a recurring feature on Aquarium Drunkard that that takes a look at particularly interesting cover art choices.

By 1993 Fugazi was three EPs and two LPs into their career. Usually this is a watershed moment for a band – a time where it becomes necessary to do something to pull away from the pack. Fugazi chose Steve Albini to head the production on their forthcoming album, scrapped the recordings and then started over with another well-known producer in 90s indie circles, Ted Nicely. The result was one of their finest albums and a defining moment of their canon – In on the Kill Taker.

The cover of In on the Kill Taker is, as all good cover art is, a visual summation of the album itself. Dominating the cover is a yellowed picture taken somewhere on the National Mall, the Washington Monument stretching above the trees and grass that line that recognizable vista. The sky takes up the bulk of the photo, the trees barely escaping the bottom of the frame and the monument standing about one-third of the way up the height of the cover. Running as a border down the right hand side are hand-scrawled letters, as if from some misbegotten manifesto, or threat, or journal. Though clipped and giving us only a partial understanding of the text’s meaning, the final lines give us the album’s title – “in on / THE / Kill / TAKER.” The album’s harsh, grating tones and blistering atmosphere is in sync with a vision of D.C. that is bleak, polluted, yellowed and dirtied with age, filled with ideas foaming at the mouth.

Jason Farrell, a graphic designer who worked along with Jem Cohen (director of the documentary Instrument) and the band in designing the album artwork, spoke with Aquarium Drunkard via email about this particular design. Jason has worked on a litany of album art over the years – including At the Drive-In’s Relationship of Command and several albums by Dischord Records’ Bluetip and the band Burning Airlines.

“In on the Kill Taker was the first Fugazi album I got the honor to work on…My role on the Fugazi projects was mostly one of production with a few design suggestions/solutions,” notes Farrell. This was also Jem Cohen’s first project with Fugazi and the first of many between Farrell, Jem Cohen and the band. “This ‘team’ worked on all subsequent Fugazi releases – Red Medicine, End Hits, Instrument movie, The Argument and the Furniture EP. The only exception was the Instrument soundtrack [which was] done while Jem was out of town.”

I asked Jason about the origin of the text used on the right-hand side. “Jem found most of the album’s elements while living in NYC. The hand scrawled stuff was a xeroxed flier that was posted around his neighborhood. It was a strange, paranoid, quasi-religious stream of consciousness rant that (while clearly crazy) kinda made sense: very sad sense. We then cut it up and re-ordered it (almost like sampling) to add interest, claim some sort of artistic control over it via editing, and make it fit into the confines of a CD package.”

I also wanted to know about the photo of the mall – was it a recent photo that was treated in some way? “Only treated with age (and an initially poor exposure). It’s an old snapshot from the 40/50’s that had yellowed over time. I believe Jem found it at a flea market in a box of old photos. We scanned it as true to the original as possible. It’s in keeping with the found art theme.”

One of the things I’ve always wondered, in writing about album art, is what kind of exposure the artist receive to the album before they are asked to create the visuals. I asked Jason how much lead time he had with the album before being asked to create and is it typical to get some sort of lead? “For the Fugazi stuff, I’d usually get a copy of the album around the same time I’d get the art elements. For other bands I’ve done it both ways: listening to the album to get inspiration, or designing “blind” (…or “deaf” i guess). Some of the albums I’ve designed are still among my all-time listening favorites, others I’ve never listened to.

“I loved working on the Fugazi albums. I love the band, and the exposure helped me get many other design projects. I learned a lot from the process and have often embraced that organic approach, but the Fugazi stuff is mostly Jem’s vision. My design style tends to slant a little more clean / technical.”

Fugazi’s later album art work certainly took on a much more dynamic tone and it’s doubtlessly because of the efforts of Jason Farrell, Jem Cohen and the band working as a cohesive unit of ideas and design. words/ j neas

6 thoughts on “Scratch The Surface :: Fugazi, In On The Kill Taker”