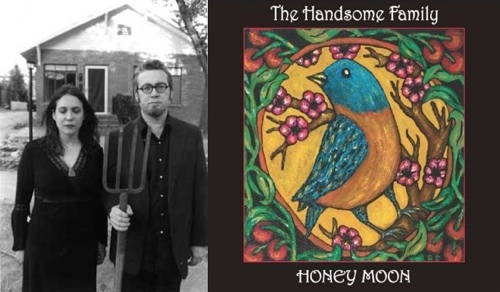 (Diversions, a new feature on Aquarium Drunkard, catches up with our favorite artists as they wax on subjects other than recording and performing.   We’re kicking the series off in style with the incomparable Rennie Sparks, of The Handsome Family, as she lists and discusses her ten favorite murder ballads. Look for the new Handsome Family LP, Honey Moon, out everywhere April 14th)

To enjoy a murder ballad you have to be willing to see it as art and not newspaper reporting. These songs are about life and lust not about death and dust. They make your heart beat fast and your skin flush. They are, perhaps, the remnants of ancient pre-Christian blood/sex rituals and are designed to make you want to roll in fields of blooming heather, not to become the next Ted Bundy. Here are some of The Handsome Family’s favorite examples of this centuries-old form of nature-worship. – Rennie Sparks, The Handsome Family

1. Banks of the Ohio :: A young man turns to murder when his fiancé refuses to marry him, but the way he carefully leads her down to the rolling water’s edge, slits her throat and then tosses her to the waves feels much more like a sacrificial offering to an angry water god than a simple homicide.

2. Knoxville Girl :: Originally titled “The Wexford Girl”, this is the true 16th-century story of a pregnant girl done away with by her reluctant boyfriend that somehow was transformed into a blood ritual designed to fertilize a barren land. The Knoxville Girl is dragged round and round so that her blood scatters like seeds into the mud. No doubt a field of violets will spring up as soon as her roving eyes are closed.

2. Knoxville Girl :: Originally titled “The Wexford Girl”, this is the true 16th-century story of a pregnant girl done away with by her reluctant boyfriend that somehow was transformed into a blood ritual designed to fertilize a barren land. The Knoxville Girl is dragged round and round so that her blood scatters like seeds into the mud. No doubt a field of violets will spring up as soon as her roving eyes are closed.

3. The Long Black Veil :: A song sung from the point of view of a ghost in which his still-living lover actually seems to be the lifeless one. She would not confess they were together the night a murder was committed and so the narrator is falsely accused and put to death. He is free now to sing and love and forgive, but she is trapped on the hilltops walking in circles in a long black veil. She is a vampire, the undead. She is like Norma Desmond in Sunset Boulevard trapped in a hell of her own making and doomed to destroy all who try to love her.

4. Katy Dear :: You might call this story a suicide pact, but we call it sex with knives. Two lovers inexplicably choose death when their parents refuse to let them marry. Strange illusions to lust abound: the parents are lying in their beds when Katy goes to ask if she can get married. Immediately after visiting her parent’s bed Katy plunges a silver dagger into her lily white breast then hands the bloody dagger to her boyfriend. When he uses it to puncture his own heart you can almost hear them moaning with pleasure as they fall into each other’s bloody arms.

5. The Willow Garden :: Poisoned burgundy wine in a dark garden with a sleeping girl named Rose.   Everything in this song is blood red or twining green leaves. What could be sexier?

6. Henry Lee :: Oh, to live in the days when the forests were full of witches and talking birds! Beware a beauty who asks you to get off your horse among the pines. She will have a golden dagger and/or a magic well. There’s always a parrot to help her steal your wallet.

7. The Fatal Flower Garden :: Here the witch lives in a gingerbread house and offers a golden ring to a little boy she lures inside. Of course, like most witches who live in candy houses, she really wants to drink his blood and throw his body down a well. Unlike Hansel and Gretel, though, this story does not end well and so it serves better as a metaphor for the day when we must all see our parents as devouring spirits and flee for our lives.

8. Barbara Allen :: Like “Katy Dear”, some might consider (it) more a suicide pact than a murder ballad. We, however, see Barbara Allen as a murderer. She kills Sweet William with her cold, cold heart, but he pulls her with him into the grave where she is forced to endure his rose thorns twining and twining around her thorny briar for all eternity.

9. Pretty Polly :: Polly’s boyfriend hates her so much he digs her grave before even murdering her, but somehow this makes him seem more like a gardener than a homicidal maniac. And, the jokes on him because planting her corpse in the ground only transforms this lily-white virgin into a flock of singing birds. In some versions of the song Polly becomes a Harpie, a bird with razor sharp teeth and ravenous appetite that swoops down to torment him no matter where her lover tries to flee. The moral here is clear: be careful what lusts you awaken when you stab a virgin with the dagger of love.

10. Polly Vaughn :: Taking the Polly/bird connection even further this song involves a man who shoots a swan in the forest only to discover it is actually his true love with her apron over her head. Hunting and death are interchangeable here with love and lust. The forest is better off for it.