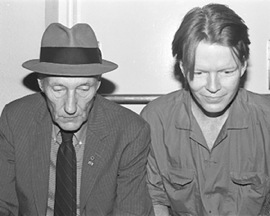 Context is everything. And sometimes it’s the mere shift of geography, the slighter or greater roar of the narrator that can make the biggest difference in a song.

Jim Carroll’s “People Who Died” is a legendary song all its own. Originally released on 1980’s Catholic Boy, “People Who Died” runs through a litany of deceased friends – suicides, ODs, murders, war dead and disease victims – as it scampers across the body-strewn landscape of 70s New York. But despite the occasional twinges of genuine anguish that come through in Carroll’s voice, “People Who Died” sounds like something more factual than mournful. Perhaps it’s in the way that several verses are repeated – lives recounted again within the same song. Here these lives become just a recounting of experience. Emotions expressed (“..and Eddie, I miss you more than all the others / and I salute you brother”) become simply a world-weary incantation – a recitation that gives away its narrator’s acceptance of the reality. It’s a delivery befitting Jim Carroll given his experiences. There comes a point where another death is just another death. It doesn’t mean the people didn’t mean anything, but you can only take so much pain in a lifetime. Sometimes, it just can’t hurt anymore.

The Drive-by Truckers have long made “People Who Died” a staple of their live shows. If you go back to 1999’s sadly out-of-print Alabama Ass Whuppin’, the early line-up of the band tears through the song with abandon. Muddling the verse order, and shuffling and adjusting lyrics as he goes, Patterson Hood’s delivery of the song is a howling maelstrom of grief. There are times where his vocals become muttered and incoherent, others where the pain is howled into the Plutonian shore. Imagining the narrator now in the small towns of the deep South, where friends are people you’ve known since you were born, not just the guy you met hustling on the street the other week, the deaths rack up in a much more serious way. As friends drop left and right, everything that seemed true is revealed in the harsh light of reality. The guitars, thick and raspy, convey something much more guttural and deeply troubling than the skittish chug of Carroll’s original. You can only take so much pain in a lifetime. Sometimes, it just can’t hurt any less.   words/ j. neas

10 thoughts on “Under The Covers :: People Who Died”