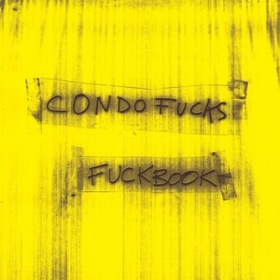 Rock ‘n’ roll can be so confounding.   Some days, you’ll be sitting there like a good rock fan, trying to compose something elegant and beautiful — one thousand provocative words about Okkervil River, a requiem for the compact disc, etc — when something like the Condo Fucks shows up in the inbox.   Fuckbook, the New London, CT, group’s latest, scoffs in the face of those who would dare to turn rock music into an English prof’s game.     Hell, just look at that album title again, and break it into their two parts.   Rock ‘n’ roll is their book.

Not that you couldn’t talk for days about this record.   There’s the history — recorded live, in one take, at a Hoboken warehouse while the Fux rehearsed for the long-rumored reunion tour that Coachella’d been waiting for.   There’s the mystique — why aren’t the group playing the old Fux classics?   Where’s “Let’s Get Rid of New Haven” and “New London Calling” and where the hell is “Baseball Hat”?

Or, you could take the veneer off, quit fooling around, and talk about how, okay, sure, the Condo Fucks aren’t a real band, that this is actually Yo La Tengo slumming it up a bit with a garage-punk covers record, releasing it under an assumed name and creating a mythology behind it as if something this powerful is going to sully the name “Yo La Tengo.”   You could talk about the diamond-faced irony inherent in the fact that indie rockers have such a hard time shedding their protective coating in favor of their more authentic selves, and the fact that Yo La Tengo — genre legends, if the “community” will allow such a thing — release their most blistering, powerful set straight from the suburbs, playing around with ideas of irony and assumptions and making fun of hipsterdom’s obsession with obscure minutiae while at the same time resorting to irony to make something they really wanted to make.   Or not.   In an interview with the Hartford Advocate, Ira Kaplan, aka Kid Condo, spoke rather frankly as a member of Yo La Tengo, leading the article’s author to declare that if anyone was having fun and fooling around with the fake band conceit, it was Matador’s publicity department and not the band themselves.

But really, all of this is beside the point.   This isn’t the type of record that you should intellectualize. It’s the kind that you spin, and from the moment the amps start buzzing on opener “What’cha Gonna Do About It,” you will begin to spin, too, because this is one of the most dizzying and immediately satisfying releases of the year.   Yo La Tengo — Condo Fucks, sorry — tear through these things, stripping the faded wax from the Beach Boys’ “Shut Down” and “Shut Down II” and coming out of the garage with a mufferless roar that beats the youngsters in Times New Viking at their own game.

And all mythologizing about secret rehearsals aside, Fuckbook‘s thirty-one minutes sound as though they took thirty-two minutes to record.   The whole thing is start-stop, tingy mic inputs feeding back, the dirty bass flopping around between songs.   Other writers have mentioned that Condo Fucks’ aesthetic approach (or lack thereof) has only served to highlight the abilities of the songs’ authors, that Fuckbook isn’t really much of an achievement on its own, and they’re exactly half-right.   The melodies and arrangements of these songs are and always have been sweet and tight, and the summer sweat of Fuckbook does serve to highlight the quality of the originals, but the passion and playing behind the record are what make it special.   Just as not every groundbreaking record is great, not every great record is groundbreaking; sometimes, doing something well is good enough.   Garage is simple to play — anyone can play four chords and imitate The Troggs — but it’s not so simple to play right.   If the 1-2-3-4 countdown, orange-crush background vocals, and ancient yelps of the Young Rascals cover “Come On Up” are to believed, garage groove can, at the right volume, border on transcendent.

And really, what we’re talking about here is feeling, partly because we sure as hell aren’t talking about the intellect, but partly because this is just the kind of no-frills, no-shame, pretension-free rock ‘n’ roll record that hits you in secret places and destroys dance floors and really doesn’t get talked about much anymore.   It’s important to have the guys in sweaters with the GRE vocabs, but when they’re the only rock ‘n’ roll heroes we have left, then you know we’re in trouble.   The beauty of rock ‘n’ roll is that anyone can do it, provided they have just a little bit of passion and are willing to be honest.

So, yeah, maybe there are flaws here.   The record gets a little same-y, and it’s about as subtle as a Coke ad, but Fuckbook’s the kind of pause that refreshes an over-thought mind.     words/ m. garner