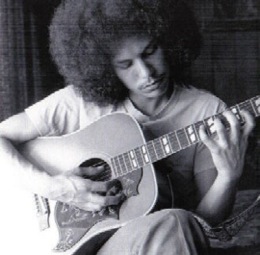 Shuggie Otis’ afro is reason enough to give his music a spin. A weave like that has potential, after all. And as it turns out, Otis’ music is a lot like his hair: a lush dome of soul-funk.

If you were familiar with Otis prior to the 2001 reissue of Inspiration Information, then you’re probably a nerd. A nerd in the best possible way, mind you, but you’d have to be to mine in obscurity like his. (That, or lucky.)

Inspiration Information is exactly the kind of discovery a music nerd would relish. It’s an eclectic twist of genre with an even blend of instrumental and early electronic arrangement. It’s layered with possibilities for discussion, about what he sounds like, what it sounds like … about what it even is exactly. Something the casual listener might dismiss, but true aficionados might try to explain. And not least, it’s also that rare, complete document to which so many artists aspire. Its continuity is unwavering, but its sampling diverse. It’s a remarkably inclusive cross-section of the artist’s potential that plays as a single, cohesive unit. That is, you can find out about Shuggie Otis in one of two ways: (1) You can read his bio, or (2) You can listen to this record. Both seem to explain the man, and the latter quite deftly at that.

Otis was the multi-instrumental wunderkind offspring of bandleader Johnny Otis. And by “wunderkind,” we mean “played bass with Frank Zappa when he was 15″ (for “Peaches en Regalia” on 1969’s Hot Rats). In the same year, at the same age, he played guitar alongside Blood, Sweat & Tears’ Al Kooper for Kooper Session. Otis is credited with the album too, since, save Kooper, he’s the only musician on every track. And he shares (baby)face time on the album’s cover, as well.]

He followed Kooper Session with his first solo, Here Comes Shuggie Otis, in 1970. And in 1971, he released Freedom Flight, a seven-song sprint expected to be his coming out party. Both records were roundly overlooked.

For the next few years, he concentrated on what would be his fourth and final LP, 1974’s Inspiration Information. Otis meticulously shaped the album. He wrote every song and played every instrument, resulting in an intricate splash of funk, soul, R&B and pop with a delicate tress of psychedelia. It’s complicated, but retains a pillowy, sun-sprayed wash. It never sounds too big, even though enormous efforts are consistently evident. Still, the record was roundly overlooked.

This is a little surprising. It includes a few soul standouts, including the single-worthy title track that opens the record (recently covered by Sharon Jones & The Dap Kings), which did receive some radio play upon release. “Sparkle City” and “Aht Uh Mi Hed” are, realistically, supporting tracks to the first, but excellent slow-groove funk renditions themselves that reinforce Otis’ Wonder-esque vocal prowess heard in the opening. Those three should’ve been enough to stave off any ill wind that the record’s more experimental (and entirely instrumental) second act might’ve (undeservedly) received. But even those tracks, though more meditative and wandering, are good. Not a matter of quality, maybe it was a problem of timing.

Despite some of the critical acclaim after David Byrne’s Luaka Bop label repackaged the material in ’01, it isn’t as though Inspiration Information is standard-defying, altogether unique music. (Some credit Otis’ orchestration as a foretelling. But then, in some way, that could be said for anything that precedes anything else.) But really, that isn’t the case. On the one hand, it was a few years too late. Something the peanut gallery might’ve thought derivative, as it sounds like a Love record if Arthur Lee was given just a smidgen more influence. (Its pop/rock tendencies are somewhere in the 1969-70 period.) On the other, it was a year or so too early, seeing as how its brand of soul-funk R&B didn’t universally catch on until Earth, Wind & Fire’s 1975 uber-sensation That’s the Way of the World. Or maybe, looking at both hands, it had an identity crisis, and the peanut gallery thought it was scatterbrained.

All of that, however, might be irrelevant. Because we don’t live in 1974. We live in the here and now. And right now, with hindsight and three-plus subsequent decades of music for comparison, it’s good. It sounds influenced, sure, but not necessarily derivative. And while it isn’t unique, it does rest in a relatively small genre-melding niche, accompanied by the likes of Sly Stone and Arthur Lee. And if you factor in that the wunderkind was shy of 21 when it was released, it seems all the more remarkable.

The collective quality is helped by the reissue’s four bonus tracks, including the nearly unrivaled “Strawberry Letter 23” and the blues-funky “Sweet Thang.”   All four originally appeared on Freedom Flight, but seem better suited for Inspiration Information, the perfect bookend to a pretty expansive journey through the heart of soul. words/ j crosby