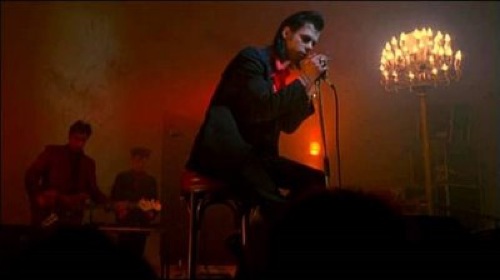 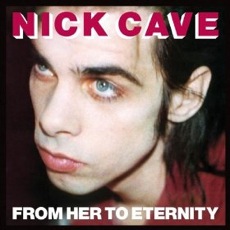 Nick Cave & The Bad Seeds — From Her to Eternity

The candles freshly blown on The Birthday Party, Angry Young Nick Cave entered a London studio in March of 1984 and, alongside BP leftover Mick Harvey and a host of others, banged and thrashed through seven tracks of what would come to be Cave’s stock and trade: Murder.   Deception.   Thievery.   Loneliness.   Literature.   All of these done up in a landscape as bleak and terrible as anything Flannery O’Connor ever imagined, and its insides couched in terror.   This is the rumbling lodestar in the dark icy sky of Nick Cave’s discography, an almost completely joyless set of songs that are lacking in the humor and grace that would temper his later work.   These songs were born straight from the oily fires at the center of the earth.

From Her to Eternity opens with Leonard Cohen’s “Avalanche,” the Bad Seeds quickly earning their name as they thunder the song into existence while Cave sings from under the snow.   Far from frozen, Cave sings with a clench-throated anger that does not relent over the next forty minutes.   “I’ve begun to ask for you,” he sputters, “I who have no greed,” and the dissonance runs deeper than the cognitive.   Beneath the anger, Cave sounds hurt, deceived, more than a little broken.   Unfortunately, these subtleties, the stuff that gives good songs their texture, lose out to the rumbling, unsustained chaos underneath.   What works on “Avalanche” quickly grows tiring, the tracks melting into one another until the anger begins to sound more affected than actual.   It’s a jagged monolith with nothing much to say and only one way of saying it.   “Cabin Fever!” feels interminable in its six minutes, even with its click-clack rhythm.   There are just too many bursts, too much fear, not enough direction.   On later albums, the Bad Seeds would learn to temper their fury with hints of form; From Her to Eternity is too pissed off to care.

What’s most striking, though, is how paradoxically empty From Her to Eternity feels.   Cave rarely sings, instead mouthing out the words as forcefully as he can.   Single piano notes are pounded and float into the swamp.   The underlying machine-gun spray of fed-back guitar doesn’t cover very much ground, and even the occasional cymbal splash dies out as quickly as it’s born.   It’s as if these songs were forced out against their will, with Cave the voice of the demon as it’s being exorcised.   You could make the argument that he’s spent twenty-five years mining both sides of this relationship — at times the priest, at times the fiend — but never again would the battle for the soul feel as if it were taking place in real-time on record rather than in the stories being told by the singer and his musicians.   And while From Her to Eternity can be a visceral, terrifying experience, it’s more of the shocking red blood of a low-grade horror film than, say, the subtle, lingering fear of something like The Shining.   This is a problem.   Like those horror films, the overwhelming amount of blood and gore make it hard to pay attention, and all of the victims begin to look the same, and it’s when people’s faces begin to blur that we cease caring about what happens to them.   As a result, From Her to Eternity ends up being a taxing listen in ways that Cave probably didn’t foresee; we’re not overwhelmed by the darkness itself so much as we are by the fact that even evil needs to vary, however slightly, in order to keep our attention.   Huh–maybe Cave’s clarion calling is articulating a higher purpose here after all.

Which isn’t to say that this is a bad record, by any means.   It’s Nick Cave, after all, and even an unrefined Nick Cave can write and creep his way around most anyone.   The title track’s screeches of guitar and pulsing pianos and Cave’s clipped vocals are effectively haunting.

The record’s confounding nature is best exemplified in “Saint Huck,”a left-hand piano workout that boogies on a creaky raft along a haunted river that’s more Styx than Mississippi.   While the Bad Seeds sweat out a jaunty, sea-going shuffle, Cave moans and growls and imagines Huckleberry Finn re-set in a fiery American South.   Again, like O’Connor, this is the stuff of hyperrealism, where all of the symbols become reality.   Cave would do this again many years later, raising Lazarus into the go-go 2000s, but where that song searched for humor and found sympathy, 1984’s Nick Cave finds greasy cities, Saints dangling on fishhooks with their righteousness zippered from their guts.   The drums start and stop, releasing tension before they’ve rightly earned it, and Cave’s sarcastic “whoo-ooh-ooh”s are numbing.   But when he spits out those great hooks, the groaners that he would become known for, it’s hard not to shiver.   “You’ve traded Old Man River for Dirty Old Man Latrine!” he shouts, and no one’s hands feel clean.   There is enough subtlety in “Saint Huck” to keep things interesting, but its knuckle-cracking backing tracks keep forcing the narrative out of the way in a ham-fisted attempt at teaching us the point.

On later albums, Cave would develop a stronger sense of playfulness — not because he’s taking the material less seriously, but because it’s the only effective way to address the horrors that so fascinate him.   Think “Dig, Lazarus, Dig” is just a sexy goof?   Listen more closely.   There’s a deep morality in those final moments, when Cave sings, “Who knows the date, and, uh, who actually cares?”   The point — that Christ’s followers are so bedazzled by temptation that they don’t care when he’s coming back — is a good one, and one that without irony and the song’s swagger would come across as either pedantic punk rockery or — and the difference here is smaller than you might think — a been-there/heard-that sermon.   This gift of Cave’s, to be able to dance across the darkness of the water to show us its absurdity, is something that took him years to discover.   On From Her to Eternity, just about all he does is stomp, and he falls right in. words/ m garner

Download:
MP3: Nick Cave & the Bad Seeds :: From Her To Eternity
———
Amazon: Nick Cave – From Her to Eternity

7 thoughts on “Nick Cave & The Bad Seeds :: From Her To Eternity”