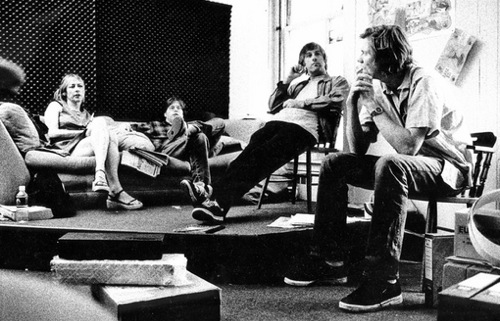 Rounding out their third decade as a band, with sixteen full-length records under their belt, Sonic Youth once again find themselves back on an independent label, Matador Records, after nearly two decades under the wing of   Geffen/Universal.   This is only worth mentioning as trivia as Sonic Youth is not band known for pandering to its audience, nor its label (yeah, I’m looking at you NYC Flowers And Ghosts / A Thousand Leaves).   Even their dipping a big toe into the commercially viable ‘alternative rock’ waters of the early ’90s felt as if it were done solely on their own terms.

The Eternal is quintessentially a Sonic Youth record, in that those who have followed the band’s 28 year musical trajectory should, by now, know what to expect. This not the sound of a band yet again reinventing themselves. While surely not a throwback record, The Eternal does employ tactics reminiscent of the short bursts of Evol and Sister, and Thurston and Kim’s “Anti-Orgasm” would feel right at home on 1994’s Experimental Jet Set, Trash And No Star.   Bar a couple of speedbumps, this is a group that has managed to not only carve out their own sound/niche, but maintain it as well.   While career longevity is not a prize in and of itself, not delving into diluted self-caricature is.   Sonic Youth’s last four albums are proof positive of this, hence The Eternal.

5 thoughts on “Sonic Youth :: The Eternal”