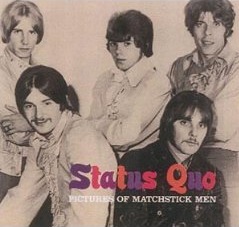 I’ve recently been reintroduced to Telephone Free Landslide Victory, Camper Van Beethoven’s 1985 debut, via a copy of the 2004 reissue.   While I never gave Cracker, David Lowery’s second project much of a chance, the Camper Van Beethoven catalog holds up surprisingly well; far better than a lot of their musical peers branded ‘college rock’ in the eighties.   In retrospect CVB’s fingerprints can readily   be found on the next wave of indie rock that was to soon spring up in the ’90s.   Especially on the early records that mixed folk, garage rock and psych with a healthy dose of Jonathan Richman.

As far as legacies go, I would wager the band is most likely remembered as either: a) the band that covered Status Quo’s “Pictures of Matchstick Men, “or b) the band that penned “Take The Skinheads Bowling” in Michael Moore’s Columbine documentary.   The “Matchstick Men” cover off Key Lime Pie was great — I loved it as a kid, first seeing the video on MTV, and later sought out the original (below).