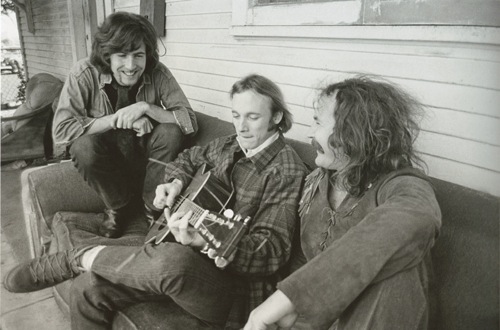 In 2007 we posted the at the time unreleased 1969 CSN demos; 16 of them, all very much worth tracking down if you’re a fan of the debut LP.   Last month an alternate set of demos was officially released (12 tracks), via Rhino Records, dubbed the CSN Demos.   The set compiles previously unreleased demos from 1968 to 1971 from various sessions, both solo and with CSN(Y).   Fans will note this collection appears on the heels of Stephen Stills 1968 Just Roll Tape demos, Crosby’s expanded reissue of If I Could Only Remember My Name, Graham Nash’s Reflections box set and Volume One of Neil Young’s archives set.   In other words, if you’re into the late ’60s canyon scene you’re very happy right now.   I’m personally a card-carrying nerd for all this shit.

This new demos collection, running under an hour, provides a glimpse into the material prior to it’s eventual inclusion on CSN’s self-titled debut, CSNY’s Déjî  Vu, David Crosby’s If I Could Only Remember My Name, Stephen Stills’ eponymous debut, and Graham Nash’s Songs For Beginners.   The sound quality has been cleaned up and on several occasions the stripped down nature of the demos augment the very mood of the tracks in their final produced/arranged form.    Great stuff to be sure, but, and not to dwell on what the set is not, I am surprised the other oddities from the sessions were not included (for example, the group doing a cover of the Beatles “Blackbird,” an instrumental demo of “Cinnamon Girl”, etc).   While I agree these sort of curios obviously appeal to the more die hard fans, with digital stores like iTunes/eMusic it would have been fairly effortless to have added an additional digital-only companion disc.   Everybody wins.   And while at it, how about a cleaned up audio release of the David Crosby 1970 session outtakes, aka The Perro Tapes?   All nitpicking aside, if you’re a fan of the principal members of CSN&Y at their late ’60/early ’70s peak you will want this in your collection.