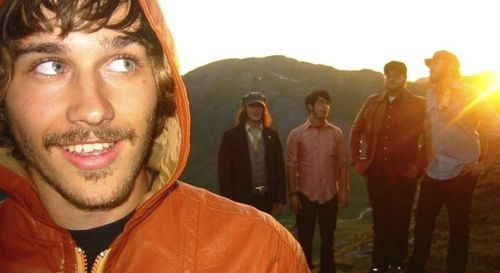 Thus far, Diversions has featured artists discussing, amongst other things, their favorite ’80s indie bands, rock ‘n roll sartorial sense, the L.A. Lakers, back of the tour-bus jams, choice Townes Van Zandt covers, and epic murder ballads.   Eclectic as always.   Today we catch up with Portugal. The Man.   Residing in their adopted home of Portland, OR, the group originally hails from the wilds of rural Wasilla, Alaska…yes, that Wasilla.   With a new album out, The Satanic Satanist, and a supporting U.S. tour, Portugal’s John Gourley describes his childhood growing up in Alaska and the the combined effects of science fiction.   An interesting cocktail to be sure.

“There are people that come from the stars, you know? They live under hour houses and have two separate races.   One type comes in the winter times and lives off the heat from our floors. They have big heads with little beady eyes and they tell me stories at night. The other type comes in the summer and looks like a fat scrunched little person and also lives under our houses. They do not like one another. Our world is going to end.“- Star Trek

This is Seti Alpha Five: Growing up in Knik, Alaska was not unlike the desolate wastelands of Hoth or the hostile landscapes Seti Alpha Five. To a child these were one and the same. Stars wove sharply skilled geometric shapes over the mountains before crashing into the horizon and drifted through the forest nightly. I was confidently told that there are two races of humanoid beings that were born of another galaxy living below our houses, visiting in a seasonal rotation and never to cross paths. Should these beings cross paths, earthly apocalypse an end to all things, or so they inferred. They had never crossed paths but had only told the stories of what would come if they happened upon a wrongly dated calendar or had one arrived early or the other left late. It was a concern that, curious as I was to see it happen,   I shared with them both.

It is somewhat odd that in all their clairvoyance they offered concern in their timing of visits. Apparently they still have not crossed. *enter superstitious action:   i.e. knock on wood

Loose Description of the descriptions:   The first… I will call it the first only because it is the first of the two in chronological order in description; I didn’t believe either to be any more or any less important than the other. They were equals in my mind…. The first was said to be short and squat and almost frog-like. Big squished eyes and a wide gape of a mouth, a mouth which it never opened, words spoken through the telepathies of mind waves and thought transference. This was a point that was relative to the two. It seems the mouth holes were simply remnants of a long evolved past, a reminder that all life, despite dimensional separation or distance of space or time could not ignore the building blocks of all humanoid life. Apparently we are all made of the same relative formula, eyes, mouth, nose, ears, and limbs in combination with the universally common bipedal body. The five senses are/were valued to some extent in even the most remote of celestial corners.

The second shared much the same, eyes nose mouth and ears, all of which were of some past long forgotten. The second was said to look like a three foot baby. Poorly developed features but infinitely more advanced in their lack of use. They both wore clothes and both told stories of the apocalypse that was soon to come and sooner had they crossed paths. I don’t recall which of the two was the “evil” one but I do remember them being distinctly separate in good and evil. I really wasn’t bothered either way, even in my young mind good and evil was relative to the perspective. The two spoke of the imminent end of days which, to a child, was neither warning nor threat but only
something to fear. I feared both. Even the consolation that there was a 99% chance that these stories were wholly falsified exaggerations of loners that got lost in their isolation there was still that 1% that would eke it’s way into my dreams. These dreams needed no catalyst; I had been working overtime in the warped reality department as is.

There are two many of these stories to write but this seemed best suited for a starter. Its teller told it with such confidence it has stuck through the years, if only out of my curiosity into what makes a brain bend. 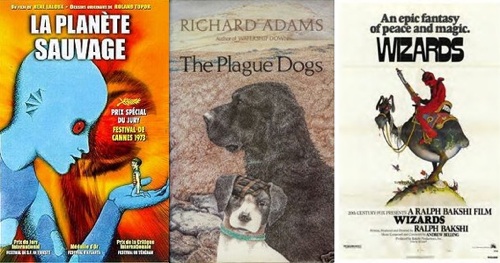 The films, the friends: Wizards, Light Years, Plague Dogs, The Hobbit and LOTR trilogy, and Fantastic Planet. These are all films that somehow made it into the “family” section of our lonely video store of Knik, Alaska. They made it in, I assume, because they were animated features and not based on the opinion of the mostly conservative Christians that worked the counter that surely would have realized the mistake that had caused this warp in my mind. This bend that, to be fair, would not have become what it has had I been raised anywhere else. These films as well as the Twilight Zone of space, Star Trek, helped along the constant spinning of imagination that was my younger years. The dark frozen winters of Alaska were the iced alien planet Hoth and the sunlight of the summer nights left ghosts dancing through the trees. It was a surreal setting that needed no catalyst but found a like minded companion in these films and in the stories we were given by tactless adults. They were yet another escape into dream worlds of giants and the fantasy land of dragons and elves and changed the way I looked at the outside world. I don’t know if it was the deeper meanings that I was catching half understanding of or just the images themselves. From the community of naked blue farmers of Light years living in their free world only to be captured and assimilated into a dark robot army of singular control or the insect sized Oms of Fantastic Planet being collared and treated as pets by the larger race of Draags, but the imagery is what made itself the most forward to my growing mind. It was the confusingly violent fairies (Weren’t fairies supposed to be fun? It took David Bowie and The Labyrinth to point out that fallacy.) alongside massacres and wars of LOTR and Wizards that readied me for the impending Armageddon of nuclear destruction that surely was on it’s way… I am sure that the piles of picture filled history books from Encyclopedia Britannica lead to why I felt this at such a young age but surely Wizards only magnified that fear. It was the suspense of Plague Dogs that left me with the fear of watching in the woods as a small meal of a boy that I was and the spinning holograms of the looming craft that Captain Kirk would fearlessly debate onscreen that left me running through the trees and staring at the sky. Now. Back to Wizards. This film in particular stood out to me due to the graphic story, and of course, watching an animated wizard say to his evil brother “Oh yeah… one more thing: I’m glad you changed your last name, you son of a bitch!“. Maybe it was just the fact that an animated character more often, in my case, innocently found in shows like Heathcliff, Babar, Scooby-Doo or Care Bears or even in the heavier cases Thundercats, Voltron or Robotech there may have been some battles or even deaths here and there but never the profanity or absurd amount bloodshed and detached realities. There were always the morals of teamwork, love, community, everything I have grown to know that was just not found in these films. The stories they told were so real that they seemed less so and have made me question things that I never would have as a child. They left a seed that grew and grew and let stars spin shapes and people come down from the sky and shadows to walk from the trees. Well, Alaska and the settings may have done that much on its own without the push.

I was raised alongside my Brother, Levi and Sister, Lindsay in Knik, Alaska. There was Knik Country Video/Liquor a 7/11 gas station and Knik Bar in partner with scattered developed and undeveloped subdivisions, the undeveloped subdivisions being the most foreboding with their Tyvek wrapped frames and unfinished roof, half tar papered and half old greenhouse scraps that provided shelter to the resident. There were tarp covered pallet walls with old tires stacked around the walls as some sort of insulation, or I assume. Old trailers that held logos of past Iditarod’s with even older cars and trucks strewn across the gravel yards where only fireweed found the nutrients needed to spring up. People living in buses and in old trailers and small shacks built in the midst of escape and miraculously remained standing to house future generations. Houses with mistaken pentagrams built into the crossbeams of ceilings and rebar frames built in geometric patterns and underground studies formed out of concrete wrapping (really! pretty crazy to stumble across in the middle of what you expect to be human-free forest.), Not to mention all the forgotten pit houses that were scattered throughout the immediate surrounding area that was our home. It was two miles from our nearest neighbors and the Cook Inlet ran up through the silt that ended our back yard. We were given the amazing event of the Beluga whales travels through the gray waters once a year, hearing their songs bounce around the trees. This is the setting in which we played and grew. These people, the far off and further lost (or found, depending on the reality) would tell us the most amazing stories as realities which in turn would take on their own lives.

In the end:   I always thought it fitting that anyone who ever had a “vision” or was told something by a superior being that the end was always so near. I also thought it surprising that the two beings never ran into one another. Imagine the story that could have been. I hoped that they would, if only to see it or hear of it. In the end I think it just made me more afraid of going outside alone. I assume 90% of all nightmares involving my home and surroundings stem from this little fact I was handed so young. Other stories get a little more graphic as you get into the lives led by the storyteller and others tend to just lean towards innocently strange, most typically ending with the worlds demise. My favorite of all was the stories told by the man from Haiti. His story being of escape from a voodoo priest. He told us how he had traveled the world and somehow “it” found him everywhere he had gone and at the time of his visit to our house he was once again on the run. The stories were of vanishing people and floating cars and of time loss and, of course, the end of the world.

In the end I this was more a story about the bending of realities and the crossing of two fictional paths. There is a responsibility of the adult mind to notice these turns and correct them. In my case I am happy I was handed them. I accepted it and it has created something different than I would have found without. This is Seti Alpha Five.

5 thoughts on “Diversions :: Portugal. The Man on Sci-Fi: Surviving Childhood in Rural Alaska”