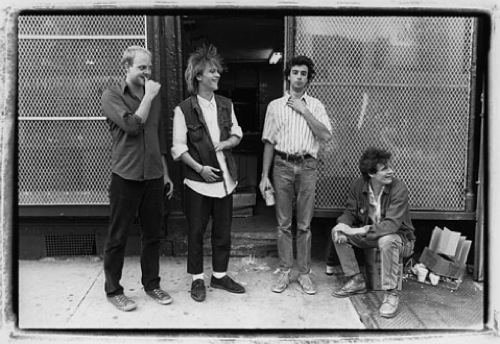 Multiple versions of songs are often one of the more exciting things about watching an artist at work. Getting to see a song run through its stages of development, recorded in different ways with different lyrics and different instrumentation – sometimes even with whole parts rearranged and dissected – gives listeners an insight into the creative process that isn’t always available when the only thing to hear is the single finished product. This, I imagine, is why we enjoy the bonus tracks on expanded editions of albums so much.

It seems that no song in the Replacements’ catalogue has provoked as much ire as “Can’t Hardly Wait.” People come down on all sides of the debate as to which version they prefer, or which ones they even hate. The song wouldn’t surface on an official studio album until 1987’s Pleased to Meet Me, but it has its origins in the sessions for their 1985 album Tim. And this could be the source of the debate over the versions of the song as there is one, big, blatantly obvious difference between the two albums: Bob Stinson. By 1987 Bob was gone and so was the firebrand guitar antics that he had brought to the band’s live show and, to a much more increasingly controlled extent, the studio albums.

The versions that were recorded for Tim are probably the oldest that are easily available. One surfaced on the All for Nothing, Nothing for All best-of set in the late 90s. It features the oldest lyrical construct for the song (“I’ll be there in an hour / take half a month there on foot..”) and Bob’s guitar work gives the song an impatient feel, something teetering on exploding. It’s a tightly wound song with some amazing playing by Bob. Another version surfaced on the expanded edition of Tim from 2008 that is a bit sloppier – in vocals and in instrumentation – and the version from All for Nothing.. is clearly the more controlled.

Also on the Tim reissue from last year is the “air shaft” version of “Can’t Hardly Wait,” so dubbed because of the cavernous effect on every thing in the song. It, literally, sounds as if it were recorded in an air shaft or stairwell. This slower, acoustic version of the song highlights the song’s lyrics, still in their oldest incarnation here, and their melancholic twinges of hope. It’s the most subdued version of the song in existence and casts it in a new light.

The live versions of the song from this period reflect something similar to the electric versions. One of the most common bootlegs from that period, a show at Maxwell’s in Hoboken, New Jersey in February of 1986, has the band racing through the song at one of the fastest paces you’re likely to ever hear it. And it’s hearing the band firing on all cylinders and creating such a bracing version of such a great, unreleased song that probably creates the greatest loyalty for this era of the song.

Here’s where things get interesting. The re-issue of Pleased to Meet Me included an alternate take of the song recorded during the album sessions. This version is pretty bare bones – the band is a trio at this point – and Westerberg doesn’t try to re-create any of the lead guitar lines. It’s obviously a live take of the song and the no-frills version of this is a bit underwhelming compared to the numerous versions that had been floating around prior, but it gives us an interesting counter point to what is happening to the song. While the first lines of the song are the same as the earlier versions, the second half of the first verse has changed – so have later lines in the song.

Finally we hit the official album version, but by the time the song made it to official release status, the lyrics would change almost entirely (“Write you a letter tomorrow / tonight, I can’t hold a pen..”) and the melody of the song would be controlled by horn and string sections. Aside from a few small bursts of guitar at key moments, the swell of the song is driven by the horns and strings, and the result is an album closer unlike anything else in the Replacements’ catalogue.

Following the lyrics – one of the more noticeable shifts in the song’s evolution – you begin to wonder why they changed so dramatically in the song’s final thrusts toward album status. The song’s lyrics were loosely structured for most of its early existence, but whether just from Westerberg’s tendency to improvise adjustments live or the sometimes sloppiness of the band, the lyrics are rarely, if ever, completely identical in these various versions. Still, the last shift, from the Pleased to Meet Me alternate version to the final product, is a radical move. Why did it happen? Also, with the band re-arranging itself in the studio to operate as a trio, as well as bringing Jim Dickinson on board to produce the album as he had done for Big Star’s Third, was the horn/string treatment a bad move or not? It’s the aspect of the song that seems to get the harshest treatment from fans when the topic comes up and for some may predict the oft-criticized over-production of their next album, Don’t Tell a Soul. As a song that had been floating around the band’s playbook for awhile, did Westerberg feel a need to try to re-define the song for the band’s post-Bob Stinson era?

Discussion: What’s your favorite version of “Can’t Hardly Wait?” Do you hate or love the album version? Leave your thoughts in the comments and while you’re at it, enjoy Justin Townes Earle’s take on the song (he takes the lyrics from the album version) from his Midnight at the Movies album.   words/ j neas