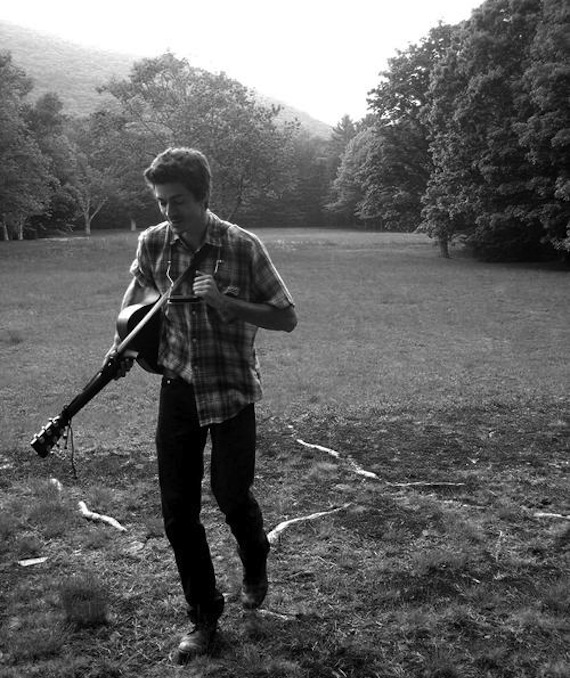 Aquarium Drunkard: You recorded American Hearts well over two years ago, so what was the process like gearing up for this new album?

A.A. Bondy: Well, it’s kinda weird. I was living in the Felice Brothers’ house in Rosendale, New York, last winter and I wrote a whole bunch of songs while I was there. I would just sit in the kitchen, stare at the snow and wrote a bunch of songs. In January we went into their studio and cut 13 or 14 songs just live there and that was going to be the record, and then I started listening to it and the stuff I liked, I liked a lot, but I didn’t feel like everything else matched up with it in quality. It was really rushed – we cut 14 songs in six or seven days.

Then I went on tour for awhile and then ended up in Mississippi and the Fat Possum guys, one of them, Bruce Watson, has a studio in his house and I just started going there every day and writing and kind of make the record up out of that. So, save two songs done in New York, the rest was done in Mississippi. It was kind of arduous. The press release makes a lot out of there being more instrumentation and that should be qualified a bit. It’s not like the last record was really stark. It gives the illusion that it is, but there’s definitely songs on it that have as many instruments as songs on this record. The new one is probably a higher fidelity affair than the last one was.

AD: Which two songs made it over from the New York recordings?

AAB: The title track and the last song on the record, “The Coal Hits the Fire.”

AD: You said you wrote more songs down in Mississippi. How many total songs were written in prep for the album?

AD: When I got to listening to the record, there was only one I’d recognized from hearing you play it live over the past years, “Oh the Vampyre.” That one obviously is older, but all the other stuff was written within the last year?

AAB: That one and “Mightiest of Guns.” That one was written sometime in maybe 2007, I guess. It was one of the last things that came out of that time. That vampire song – I can’t remember when or where I wrote it and it’s kind of like that song has always been there in a way. And there’s another version of the song – it’s a real Hank Williams kind of version of the song. Now it’s just a guitar and a voice, but that one has a weird organ part and kind of honky-tonk vampire. [laughs]

AD: Going to capitalize on the Twilight craze with that? [laughs]

AAB: No, it’s like that with True Blood, too. I don’t think they want anything that literal. I wrote that song about, you know, an actual vampire. A lot of that stuff seems cartoonish. I haven’t seen [Twilight], but it seems like vampires for teenagers. Mine isn’t that good looking.

AD: What sort of band are you taking with you on the road for this tour? Or are you?

AAB: Yeah, I could still play by myself. I don’t find it as interested as it was. At this point it’s really only interesting as an exercise in seeing what you’ve got. It’s much more of a physical or mental exercise. I just want to hear other things that I’m not in control of when I go up there. A lot of the songs, I’m just not interested in playing by myself.

AD: Not that you necessarily want to go out and recreate the record live, but I’m sure the fans enjoy hearing versions that are similar to what’s going on on the record.

AAB: Yeah, and I’m sure I’ll still do things like that by myself in the middle of the set. I don’t know. When the whole thing started and I needed to make money and nobody knew who I was, not that anyone knows who I am or that I have a lot of money now [laughs], that’s just how it had to be. I guess I let myself have my picture taken with a harmonica and a guitar too many times. But that’s the simplest way to get the most sound out of yourself. It’s weird. That picture of a person equals singer-songwriter.

AD: Is there a thematic element to this record? There wasn’t a single theme to American Hearts, but the songs still felt cohesive lyrically. Is there anything like that with this album?

AAB: I would imagine, to an outside listener, it’s a much more abstract record. It’s something that more generates a feeling rather than telling someone how to feel. I got to the point with some of the older songs where I felt like they were kind of like sloganeering and I didn’t always agree with them all the time and it became hard to interpret them on a given night. They didn’t really have a lot of wiggle room on how they had to be delivered and I didn’t want to have to deal with that this time.

AD: That’s interesting. I would think it might be something that a lot of artists deal with – they write stuff they don’t always agree with themselves. Is that something you’ve always come across – that you don’t always feel exactly what you wrote that second?

AAB: Well, if I’d put that album out and didn’t have to go out and play those songs so many times, they could’ve just existed in the ether and I wouldn’t have had to deal with them again. It marked the time like a journal. I was just confronted with it all the time and I don’t like being up there doubting what I’m saying. I can phone it in. I can give the illusion that I mean it, but that doesn’t feel good. The new record was written at a time of upheaval and change and it just didn’t feel like there was a whole lot of stuff to grab onto. I have a different perspective on it than others will. I do feel it’s kind of abstract at times. My friend Nick’s mom listened to the record – I gave her some background into what had been going on when I wrote it, and she said ‘oh, I didn’t get that at all, I thought it was really beautiful.’

AD: As someone who is both an artist and, obviously, an audience for other people’s art – whose interpretation is more valid: hers as the audience or yours as the author who knows what you meant by what you’ve created?

AAB: I don’t have her ears. I don’t know what she hears. That’d be a great luxury in some ways to see and hear whatever it is without having your own stuff attached to it. I thought the record was dark. Maybe it’s not. It’s hard to say what affects you and what doesn’t.

AD: That’s where personal biases come in. What’s beautiful to one person is harrowing to another.

AAB: Well, there’s this friend of mine. She had this buddy in Woodstock who had a radio show and he dedicated a song to her and it was “Strange Fruit.” It’s like, that’s a pretty weird dedication, you know? So, does he know what that song is about? That’s one of the great things about music. It’s not just like poetry and words – people can listen to something and not really hear what it’s saying and think it’s beautiful. It’s like a Trojan Horse in a way. It’s probably gotten a lot of songs through the door based on the arrangement or someone’s delivery and it turns out someone’s singing about something very dark and then you don’t know what to think about it. Maybe there’s some of that at work.

AD: That’s something I’ve thought about – the separation between artist’s intent and audience interpretation. How valid is the audience’s interpretation and can you even measure that?

AAB: Yeah, I think every writer has songs that they don’t know what it means all the way, but they don’t really need to. The combination of the voice and the words kind of transcends what either one is doing on their own and becomes an indescribable element at some point. Context is tough sometimes. There’s a painting by Winslow Homer called “Veteran in a New Field,” and when I look at it I don’t see anything other than some dude standing at a field of wheat with a scythe and I wouldn’t know anything more than that. But the whole point was that he had been in the Civil War. Part of his clothes are remnants of a uniform and all that. That stuff can be important, if you’re so far removed from something to not even know what it’s about. But if it’s a good enough song, it’ll work. There’s some power that can end up in a song and you don’t need to know what people are talking about. words/     j neas