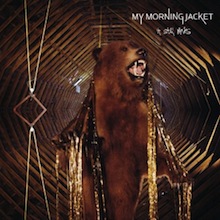 Back in 2003, My Morning Jacket were just five dudes singing out songs from the bottom of a grain silo in Louisville, Kentucky. While later albums Z and Evil Urges found MMJ stretching across country-rock to skeleton funk and taking in everything between, It Still Moves marks the fully-cooked sound of a band reaching deep into the soil while pulling their songs as high into the atmosphere as they can go. It’s a vertical record that sounded simultaneously lost and discovered when it was released, with an ancient tone as warm as honey.

Something about It Still Moves feels inevitable, almost as if the loamy ground itself had given birth. Jim James’ voice, cloaked in reverb, hovers over the songs on a bed of metallic harmonies like the string that holds the clouds in the sky. Perhaps it’s the minimalist aesthetic, but nearly every track feels humble and unshowy; any other band would have pumped serious compression and studio muscle into rockers like “One Big Holiday” and “Mahgeetah”, but James’ understated production hugs the listener in. Even “Run Thru,” which sounds something like “Cortez the Killer” conquering the ghetto, unravels its power more than it unleashes it. These songs felt broken-in the first time they were spun, like they were made for their listener only, and six years down the road, they hang even closer to the skin.

And yet the whole things still sounds normal. Despite all the celestial grandeur, My Morning Jacket never sound like anything other than a handful of dudes making good music; they could have been playing just up the road from you at one of the dark and lonely bars that James is so wary of in “Golden“. It Still Moves is local in the bigger sense of the word–it’s rooted not only into its physical geography, but also into the emotional geography of the people who made it. And for all of the bombast that the band has produced in the meantime, this humble little rocker still shines the brightest. words/ m. garner