From now through the end of December, Monday through Thursday, AD will feature a post, or posts, from a particular writer detailing their favorite albums of the decade. On a given week there might be one album a writer talks about, there might be six, but they’ll get a chance to have their say on everything that comes to mind. Our hope for you, the reader, is that you’ll jump in with your comments on the album selections — tell us why you agree or disagree — and also be exposed to some albums that you may have missed over the last ten years. Now, as the decade starts to wind down, let’s celebrate. 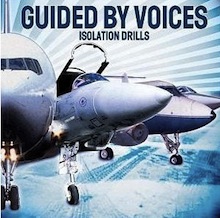 Thus far our Decade entries have focused on artists that either came into existence in the 2000s or, at most, the tail end of the 90s. Those who have been around longer than a decade often pose a tricky proposition in regards to their later-period works rivaling that of their early brilliance. But then again, Guided By Voices never quite fit that mold, or any mold for that matter.   Though their first album was released in 1987, one could easily argue they didn’t make their first great record until 1993 or ’94. Then there is dealing with Robert Pollard’s prolific streak — 22+ years running, full of boundless creativity that, in terms of record cohesiveness, often yielded a mixed bag of results.

But early in the 2000s Pollard and the second version of Guided By Voices (backed by Cleveland’s Cobra Verde, who took over that role starting with 1997’s Mag Earwhig!) created the most focused of Pollard’s later-period, more hi-fi recordings. It was obvious from 1999’s Do the Collapse that Pollard wanted to take the band in a bigger, more slick direction, but the results on that record had seemed overly glossy and middling. Isolation Drills benefits from two things: the best collective set of songs Pollard had churned out in some time; and a raggedly polished sound that finally balanced the band’s rock with its recording ambitions.

Isolation Drills is track after track of uniquely catchy and engaging rock. Opener “Fair Touching” comes at you with the exact type of hooky guitar rock that used to be buried beneath poor recording quality or any number of other disguises that the band would employ. It’s a perfect pop song in its use of the opening, gut-grabbing guitar riff which wanders off into verse and chorus terrain before returning to the opening riff again. “Skills Like This” ups the ante with a thicker and more raucous structure and “Chasing Heather Crazy” echos “Fair Touching”‘s structure for more winning pop.

If someone were new to Guided By Voices, tracks like “Frostman” would seem like odd little lo-fi bridges, designed for brief moments to distract from the glossy rock, not call-backs to the band’s past. But here they do just that, briefly reminding of the band’s lo-fi heyday before tearing into emotionally endearing songs like “Twilight Campfighter.” As Pollard sings in “Skills Like This,” “I want to re-invent you now.” Whether he’s talking about the band’s vision or not, it’s accurate.

Nowhere is this more obvious than in the album’s unquestionable highlight (and, honestly, one of the band’s unquestionable career highlights), “Glad Girls.” It sounds cliché to say, but I’m sure there is an alternate universe somewhere where this song and “Hey Ya” were both inescapable during the 00s. It’s ridiculously fun to sing along with, simple and uncomplicated and represents and energetic apex on the album. Its placement at the peak of the album is no coincidence and it serves as a mile marker for the band in many ways.

Guided By Voices would continue in a fairly similar vein until Robert Pollard called an end to the GBV name in 2004, but Isolation Drills is their finest moment of the 2000s and arguably of their post-Alien Lanes career – an ingratiating album that only becomes more so over time. words/ j. neas