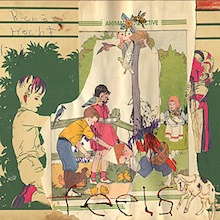 Whatever else it meant, engaging with indie rock in the 00s meant answering the Animal Collective question.   Like Rush Limbaugh and college football, Animal Collective are not something about which you are allowed to feel ambivalent.   You must hate them; if you don’t hate them, you must love them.   There is no middle ground.   Perhaps the group’s noisiness–that collage of rhythms and feelings and whispers and shouts that clutter the soundstage of each of their records–when combined with the heaps of critical praise typically lavished upon them combusts into the type of anger typically reserved for, say, health care debates.   The thing, though, is this: Animal Collective really aren’t as unlistenable as they’re made out to be, and that’s especially the case on 2005’s brilliant Feels.

The album’s artwork is an homage to the legitimately creepy Henry Darger, and while Darger’s work sought to expose the dark creepiness of childhood, Feels puts the light back in.   The darkness here–Avey Tare’s shrieks in “Grass”, for instance, or the curdling noises that lurk beneath “Banshee Beat”–well, it’s just not that dark.   These are love songs, after all, songs about people who realize that they belong to one another.   Like the music, the lyrics are more suggestive of texture and emotion than they are specific stories; “Grab their big wrinkly skin, so tough, wrinkly wrink, wrink wrinkly rough” doesn’t mean anything, of course, but in the context of the fabulous “Did You See the Words”, it means everything.   Perhaps it’s rote by this point to mention how giddy the group sound, how brimming with energy and happiness and childlike wonder, but all of those adjectives still ring true; this is exuberant music, filled with the best ecstasies of childhood and directed at truly adult emotions.

The albums is evenly split between floor-banging freak-poppers (“Grass”) and slowly-melting pastorals (“Bees”).   The pop songs are what’s typically won praise for Feels, but don’t be denied the end-of-summer romance of “Banshee Beat”.   The slower tracks don’t grab the listener with the same intensity of, say, the polyrhythmic drums and shouting of “The Purple Bottle”; their interactivity consists instead in allowing the listener to sit still before them while they unfold and reveal slowly cresting seas of miniharp, whispered vocals, and piano taps.   Feels rewards patience.

But more than anything, it rewards its own title; this is an album of feelings, a study of the emotion of love that loses none of its thumping realities.   More mature in structure and composition than 2004’s Sung Tongs, and more direct than 2007’s skronky Strawberry Jam, Feels is Animal Collective on the height of their wizardry.   words/ m. garner